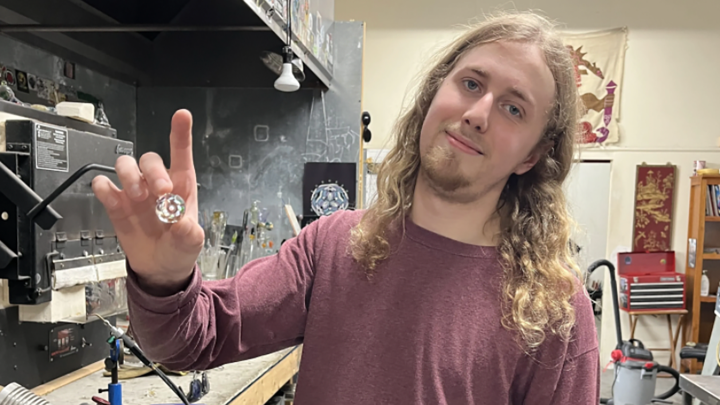 COPY
“You couldn’t stop me from doing this if you tried,“ Hunter Read says of making his faceted glass marbles. Marielle Segarra/Marketplace
The Calling

“You couldn’t stop me from doing this if you tried,“ Hunter Read says of making his faceted glass marbles. Marielle Segarra/Marketplace
Listen Now

The big quit. The great resignation. Whatever you want to call it, millions are leaving their jobs. We’re doing a series about people who have followed their calling. You can tell us about yours below.

In the basement of an old industrial building in Rochester, New York, there’s a room where Hunter Read is leading his new life.

He spends his days and nights in front of a machine that sort of looks like a turntable, with a grinding wheel that spins at high speed. All over the walls, he’s scribbled elaborate mathematical patterns.

What’s he doing? Well, I can tell you what he’s not doing: working the parking lot at a Home Depot. A year ago, that was his job. For $12 an hour, he would put away carts and lift bags of mulch into people’s cars. It was a lot of walking back and forth, back and forth.

“I had this pair of shoes that had a hole in the bottom of them,” Read said. “And it was, like, February and just raining and torrential, and I just couldn’t keep my feet dry.”

All day long in the parking lot, he would daydream about what he really wanted to be doing.

“I just couldn’t be at work anymore, he said. “It was all I was thinking about.”

Read had recently fallen down the rabbit hole into the world of glass art.

In 2019, he was piling up student debt studying computer design when he realized it wasn’t for him. So he dropped out. Then, a friend made an introduction.

“I had just decided I wasn’t going back to college, and he offered to hook me up with this glass artist,” he said.

Read had been interested in glass art since high school, so he started buying this artist’s work wholesale and selling it online as a side hustle. Then, when that artist left town in the pandemic, he sold Read his homemade glass-cutting wheel.

Read had a bunch of marbles with trippy, multicolored designs inside — and he spent hours on the wheel, cutting one into a diamond using mathematical patterns. Then he did it again.

A couple of weeks in, he posted one of his creations on Reddit: a diamond cut, rainbow-colored, psychedelic-looking marble.

Dozens of people messaged him, wanting to buy one. He sold six for $150 each. Suddenly, he saw a path out of his dead-end retail job. Plus, he figured if he failed, he could always go back.

“It’s like a pulse check to get a minimum-wage job,” Read said. “They treat you as replaceable. Because you are, right? And in the same vein, they were replaceable to me.”

So he quit, just stopped showing up. He told his partner and his parents that he got fired. He didn’t think they’d understand.

“Nobody in your immediate circle wants to support you quitting your job, because nobody wants to tell you to take a risk and then [have] it turn out poorly for you,” he said.

But Read felt like he had to take the leap. And things went pretty well … for a week.

One day, the glass cutting wheel — on which he had pinned his entire existence — broke. It just collapsed in on itself.

He spent days trying to fix it and eventually came up with a solution that involved drilling a hole through the axle. He got a second opinion from a friend who builds race cars.

“And I was like, ‘If I do this, will it kill me?’ Like, ‘If I did this, and then flicked the switch, would you feel comfortable standing next to it?’” he said.

She gave him the green light, and though the fix worked, the wheel broke again. So he sold some of his stuff and bought a brand new one for $700.

This is where, financially, things started to get tricky. Today, Read is making more money than he did at Home Depot. But he has new expenses. For instance, he got tired of working from his backyard, so he rented a studio.

He’s working 60, sometimes 70 hours a week. And his body hurts. He gets shoulder pain from all the repetitive sweeping motions on the wheel. He also designs his marbles to be viewed with one eye closed.

“I didn’t know that my eye socket and part of my brain, like, the muscles, could be tight there,” he said.

Before, he was making art for himself. Now he needs it to pay his bills.

He turned a passion into a job. And it’s stressful. If he posts a marble on Instagram and it doesn’t get many likes, he’s thinking, “You know, am I teetering? Am I falling off? Do people not like my work as much as they used to? Am I doing something wrong?”

Home Depot was just a job. He wasn’t lying in bed at night thinking about the carts. But that’s not the kind of life he was looking for. And now?

“You couldn’t stop me from doing this if you tried, “ he said. “Like, the bombs could drop tomorrow, whatever, and me and two cockroaches — I’d be trying to show them my marbles.”

It’s been a year since Read quit. And he has started to get into glassblowing too, to make the marbles that he later cuts into diamond shapes.

It’s cool to watch. He puts these little dots of hot-colored glass on a clear bulb and then spins it around over a blowtorch flame, like honey on a stick. And suddenly, he’s made an oval-shaped marble with a brightly colored spiral inside.

One of the things Read likes about this work is that his marbles have no productive use. They exist simply to be admired.

“People call them pocket vibes or pocket protectors,” he said. “Just something cool to look at when you’re out in the world.”

Read is only 23, so he doesn’t know if this marble thing is forever — but what matters is that it makes sense to him right now.

Have you, or someone you know, quit a job to pursue a calling? How did it turn out? Tell us in the form below.