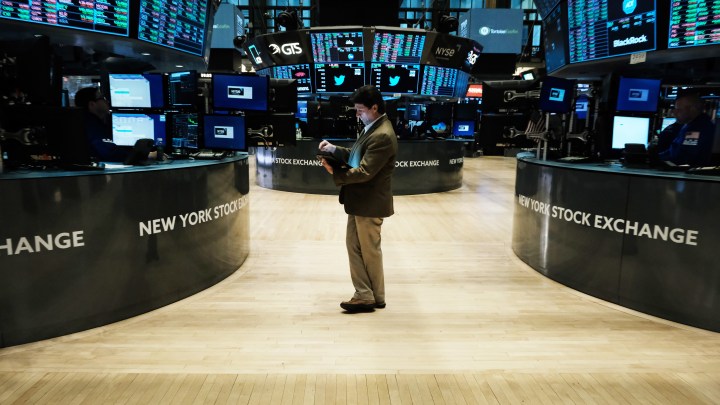 COPY
If the value of people's stock investments go down, they may be less inclined to spend — at least a little. Spencer Platt/Getty Images

If the value of people's stock investments go down, they may be less inclined to spend — at least a little. Spencer Platt/Getty Images
Listen Now

The Federal Reserve announced on Wednesday that it would be raising its benchmark short-term interest rate by a half-percentage point. Markets have already responded to the Fed’s rate hike; they basically knew this day would come.

It’s not that the Fed tries to drag down the market. “The Fed does not make policy — they’re very clear about this — does not make policy based on what equity markets are doing,” said Tim Mahedy, a senior economist at KPMG. “I used to work at the Fed, and I can tell you that is 100% true.”

A shaky stock market can lead people to spend a little less and take a little pressure off inflation.

Here’s how it works, according to Bill English, who used to oversee monetary policy development at the Fed and now teaches at Yale: “If people’s wealth goes down, they want to replenish their wealth. They want to save more, so they spend less.”

Pretty simple. People see their investments sink, their stomachs also sink and they’re less inclined to spend extra money. And the less people spend, the less pressure on prices there is. But there is a limit to this effect, said Kairong Xiao, an associate professor of finance at Columbia Business School.

“If you lose $1 of your wealth from your stock investment, on average, people cut their consumption by three cents, which is very small,” he said.

To be fair, the S&P 500, for example, has lost $2 trillion worth of market capitalization this year, so the consumption effects aren’t nothing.

But it’s not a particularly strong phenomenon. On top of this, families are in pretty good financial shape compared to the start of the pandemic, so they have an extra cushion before they are gonna start to dial back spending in a meaningful way, said Boston College economist Brian Bethune.

“So, if we have a correction in the stock market of 15%, that’s not gonna make a big impact on household net worth,” he said.

This is one reason the Fed has a long road ahead as it tries to control inflation. There’s a lot of strength in the economy and in the housing market and it will take time for it to all cool down.