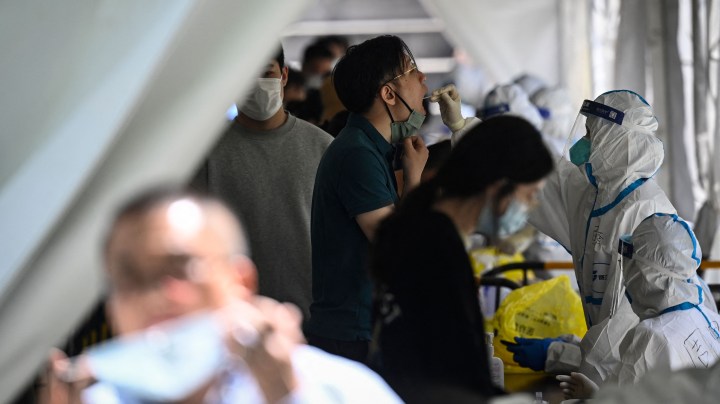 COPY
Regular COVID-19 tests are required for workers in Shanghai who receive work permits — though the process to getting there can be arduous. Jade Gao/AFP via Getty Images
COVID-19

Regular COVID-19 tests are required for workers in Shanghai who receive work permits — though the process to getting there can be arduous. Jade Gao/AFP via Getty Images
Listen Now

Shanghai’s government has allowed some 600 companies to resume operations after a strict COVID-19 lockdown began last month. Another 1,200 firms have received official approval to go back to work as infections decreased. The first batch of companies to restart factories includes U.S. electric car company Tesla and German automaker Volkswagen.

However, official approval for firms is just the first step. Getting permission for workers to leave their apartments is a big challenge, according to the Minnesota-based U.S conglomerate 3M.

The company — which manufactures face masks and respirators, among many other things — employs 1,700 workers across its four factories and two distribution centers in Shanghai.

“It’s estimated that only about 50% of our employees meet the requirement for them to be back to work,” president of 3M’s Chinese operations, Ding Hongyu, told reporters recently.

To qualify, workers need to live in a building that has not had any COVID-19 infections for a week. In practice, building supervisors decide whether to let workers out — and some have not been allowing people to leave.

Residents who can go out must apply for a work permit, which requires a negative nucleic acid test or PCR done within the last 48 hours. Regular tests are then required once staff return to their work sites. Delivery drivers are subject to more frequent testing because they interact with the public.

“On a daily basis, all the delivery riders must receive two antigen quick tests with eight hours between them and at least one [PCR] test for every 24 hours,” said Shen Li, vice president of Alibaba’s grocery chain Freshippo, at a press conference last week.

Employers are also required to house and feed factory workers on site, within a sort of bubble system.

SAIC Motor, a Chinese firm that has joint ventures with General Motors and Volkswagen, has nearly 40,000 employees across its factories in Shanghai. SAIC said it provides workers with individual sleeping space at work wherever possible and asks staff to dine in batches rather than all at once. Companies that do not have dormitories on-site, like 3M, must put workers up at nearby hotels.

“We [also] have designated buses for their transportation and commute, but now there are only a limited number of hotels,” company official Ding Hongyu said.

Many hotels are already occupied by medical workers and other personnel aiding in Shanghai’s pandemic prevention work. Another big challenge for companies is logistics. Delivery trucks from other provinces have trouble getting in and out of the financial capital.

3M’s Ding said his firm used to contract out its truck deliveries. Now, the government has issued passes for 3M to do this itself.

“These vehicle passes are not enough to fully solve the problem of logistics that we encounter,” Ding said. “Logistics should be left to the professionals.”

On top of companies’ struggles with logistics and obstacles to getting their staff out of their homes and into work, there is another big uncertainty: If a single case is detected in a bubble system, the business in question might have to close for a week or more.