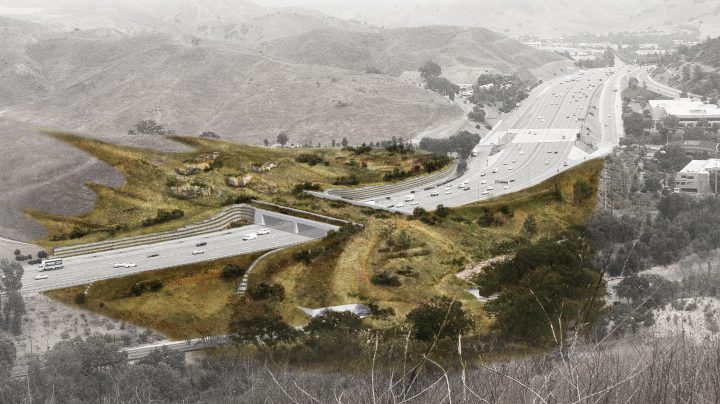 COPY
An artistic rendering of what the crossing will look like from the south of Highway 101. The crossing will be 175 feet wide and 210 feet long – that’s about the width of an American football field going over 10 lanes of highway. Courtesy Living Habitats LLC and The National Wildlife Federation

An artistic rendering of what the crossing will look like from the south of Highway 101. The crossing will be 175 feet wide and 210 feet long – that’s about the width of an American football field going over 10 lanes of highway. Courtesy Living Habitats LLC and The National Wildlife Federation
Listen Now

A wildlife crossing to help animals scamper over a busy highway just north of Los Angeles is scheduled to break ground April 22.

It will span Highway 101 and a side road — 10 lanes of traffic in all. And The National Park Service said no other crossing in the world, at least that it knows of, stretches across such a busy series of roads. At 175 feet wide, it will be about the width of an American football field. The total price tag is $90 million, most of that from private funds.

The crossing will span a section of Highway 101 in Agoura Hills, where about 300,000 cars pass through Liberty Canyon every day. It will look like a giant bridge going over the highway, but instead of supporting cars, the bridge will be filled with soil and plants.

This wildlife crossing will reconnect habitats that have been cut off from each other for decades, because of the impenetrable wall that is Highway 101.

“The wildlife were already sort of coming to this area. They get here and they’re like, ‘Ah, ah, I’m not crossing this,’ and they turn around,” said Beth Pratt, the California Regional Executive Director for the National Wildlife Federation. She’s led this project.

Standing at the future location of the crossing, Pratt wears a knitted sweater with Mountain Lion P-22 on the front.

“Who I call the Brad Pitt of the cougar world,” Pratt said.

That’s right — a cougar celebrity who is the inspiration for the crossing. “For me, what he did was get the public engaged, which is really important,” said Pratt.

P-22 has fascinated the public because a decade ago he managed to cross a number of major highways, unhurt and got himself to Griffith Park near Hollywood. He still lives there today. The idea of this lonely, bachelor cougar spurred the campaign to connect wild spaces.

The wildlife federation started going to the public to raise money for this project back in 2014. It was priced at $90 million. Pratt said about 60% of that will come from private philanthropy; the biggest single private donation was $26 million. State funding contributed about 40%.

Now, P-22 won’t benefit from this particular wildlife crossing — he’s miles away from the crossing site and too cut off at the moment. But many other mountain lions will.

“Really important thing we’ve learned about the mountain lions is that genetic diversity in the lions in the Santa Monicas is very low — basically the lowest that anyone’s seen,” said Seth Riley, a wildlife ecologist and Branch Chief for Wildlife with the National Park Service and Santa Monica Mountains National Recreation area.

Riley was standing on one of the hills close to the highway to get a bird’s eye view of where the crossing will be located. He said the genetic diversity of these mountain lions is low because of inbreeding. Male cougars are mating with their daughters, granddaughters and even great-granddaughters.

“The goal is not for the population to get bigger, because it is what it is. The goal is for it to be better connected to the other populations,” said Riley.

And it’s not just mountain lions that could benefit. So might deer, coyotes, bobcats and even frogs, snakes and lizards. Special care will be taken to bring in the right soil and have native plants. There will be massive sound barriers to dampen the noise of traffic. Street lights may be shortened to darken the crossing.

It’s all to make the crossing as inviting as possible to wildlife.

Robert Rock is the COO of Living Habitats and the lead architect. “We’re going to end up having species that are going to call that crossing home because it’s going to be this piece of habitat that they don’t navigate out of,” he said.

The crossing is scheduled to open for animals to use by around late 2024.