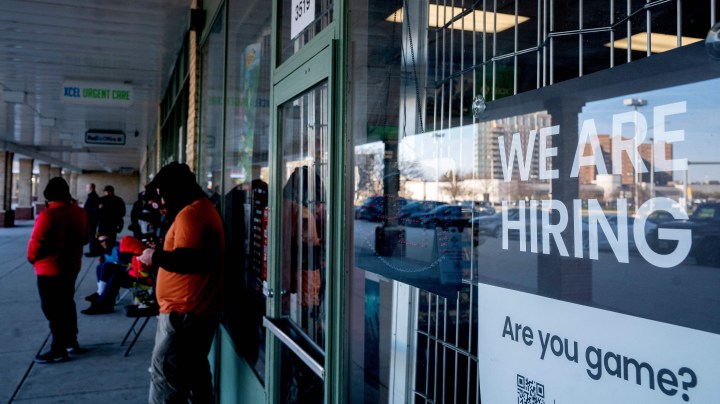 It’s Thursday, the day we get jobless claims from the Labor Department. Last week, initial claims fell to 166,000, the lowest level in more than 50 years. Sounds like a good thing, right?

Can we ever reach an unemployment rate that’s too low?

“It sounds strange, but the answer is yes, we can,” said David Wessel, an economist at the Brookings Institution. Wessel said it was hard to say exactly how low was too low.

Wessel isn’t fudging the issue here. It’s hard for economists to say definitively whether unemployment is too low at any given time. And it’s true we’re experiencing some hallmarks of low unemployment — a tight labor market, rising wages and inflation.

But (and this is a big but) we are also still experiencing the economic effects of the pandemic. It’s why the unemployment rate doesn’t paint the whole jobs picture, said Elizabeth Ananat, an economist at Barnard College.

“You know, we still have a lot of people out of the job market who would like jobs,” she said.

Women, for example, are returning to work. But participation rates are still below what they were before the pandemic. And in general, Ananat said, the job market itself has changed: “We’re just in a bit of a disequilibrium and we’re trying to figure out what a post-COVID economy looks like.”

Which means that more and more, economists are wondering if the unemployment rate tells us what we think it does. Plus, if we just focus on that one number, we lose sight of the details. For instance, unemployment among Black workers in March was 6.2%, almost double that of white workers.

Studies show that if the overall unemployment rate drops low enough, “even those gaps start to erode a little bit,” said Josh Bivens, director of research at the Economic Policy Institute.

It’s why he says some benefits of really low unemployment could outweigh the problems.