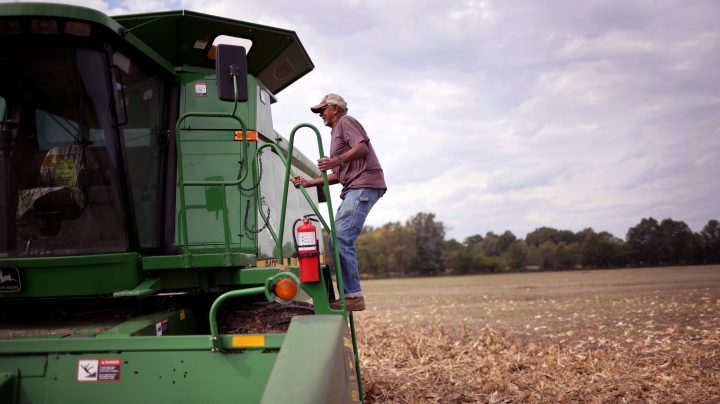 COPY
With the global supply of soybeans, corn and wheat disrupted by the war in Ukraine, U.S. farm lobbying groups think growers can increase output by using some of the 4 million acres enrolled in the Conservation Reserve Program. Scott Olson/Getty Images

With the global supply of soybeans, corn and wheat disrupted by the war in Ukraine, U.S. farm lobbying groups think growers can increase output by using some of the 4 million acres enrolled in the Conservation Reserve Program. Scott Olson/Getty Images
Listen Now

The planting season for commodities like soybeans, corn and spring wheat are getting underway around the country. And with the global supply of those commodities disrupted by the war in Ukraine, some big U.S. farm lobbying groups have an idea about how to increase their output.

It involves some changes to the federal Conservation Reserve Program, or CRP, which pays farmers not to plant on some of their land.

The CRP has two major goals, according agricultural economist Scott Irwin at the University of Illinois. The first: “to help balance supply and demand,” he said. When supplies are lower, farmers can sell their crops at a better price.

“The second goal is conservation,” he said, to protect water, wildlife habitat and soil. With commodity prices soaring, Irwin said some U.S. farmers might be eyeing their CRP land.

“If it is possible to use those acres, I’m confident that there’s some farmers out there in the U.S. that will,” he said.

A couple of farm lobbying groups are urging the U.S. Department of Agriculture to allow farmers to plant on some 4 million acres of prime farmland enrolled in the CRP.

“There’s growing concern over the war’s likely effects on global food security,” said Shelby Myers, an economist with the American Farm Bureau Federation. “This is a call from the U.S. to say, ‘Is there a way to help mitigate that?’.”

But there are plenty of reasons farmers might decide against this.

Eric Deeble is the policy director of the National Sustainable Agriculture Coalition, he said the cost of fertilizer and farm equipment is sky high, and in parts of the U.S., spring planting is already underway.

“Farmers aren’t going to make money here, and all we’ll do is invite environmental calamity,” he said.

Earlier this month, Secretary of Agriculture Tom Vilsack said it’s too early to make a call on opening up CRP lands, but he didn’t rule it out.