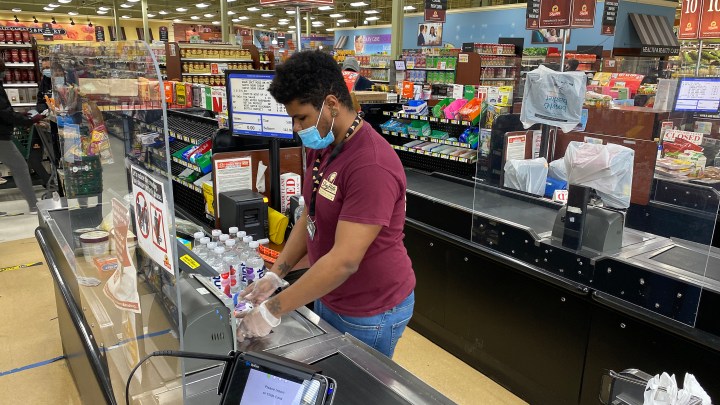 COPY
Research shows that consumers are more inclined to "round up" purchases for charity at checkout than they are to donate a full dollar. Al Bello/Getty Images

Research shows that consumers are more inclined to "round up" purchases for charity at checkout than they are to donate a full dollar. Al Bello/Getty Images
Listen Now

Sometimes making a purchase comes with ethical quandaries. You’re in the checkout line, buying a soda or a greeting card or a dozen eggs, and when you get to the cashier — or the machine that you’re operating in lieu of a cashier — you get the question: “Would you like to round up your purchase to benefit a charity?” If you say yes, obviously you’ll give less than a dollar. And people are more likely to say yes when asked to round up.

“I remember standing right at the exit doors, asking myself, ‘Why?’” said Katie Kelting, an associate professor of marketing at Saint Louis University.

Kelting had agreed to round up her purchase for charity at a Petco store. Other times, when she had been asked to give a whole dollar, she’d always said no. She wondered what was different about this request to round up.

With fellow researchers Stefanie Robinson and Richard J. Lutz, Kelting decided to figure out why. “We started testing to see if I was weird or not, and I wasn’t,” Kelting said.

Kelting asked her local zoo to be part of her research. It had already been asking for a dollar whenever someone bought something. You know the kind of request: “Here is your corn dog. Also, would you give a dollar to help the prairie dogs?”

For the experiment, Kelting had the zoo switch and ask customers if they wanted to round up their purchases instead of giving a whole dollar. Turns out, more people agreed to round up.

“So this percentage of people saying ‘yes’ to the round-up kind of takes off and brings in more overall money,” said Kelting. About 21% more, according to her research.

The team also did research in a lab setting to explore why more people said yes to rounding up. In short, it hurts less.

“Even though donating does have this positive feeling associated with it, they call that ‘warm glow,’ it is a financial loss to consumers, and financial losses are painful,” said Kelting.

In other words, people don’t really want to give until it hurts. Companies that offer the ability to round up seem to get that. For example, Lyft offers the ability for consumers to round up the cost of their ride and donate to a charitable organization. Right now, the app is featuring emergency relief for Ukrainian refugees.

“For riders who may be price sensitive, it allows them to sort of set it and forget it,” said Kristin Sverchek, president of business affairs at Lyft. “It allows riders to do this very seamlessly and frictionlessly.”

Lessening that friction has actually become a business. The company RoundUp App allows people to round up every single purchase they make for charity. The average user donates about $30 a month.

RoundUp App also works with merchants that want to ask customers to round up at checkout. Fineberg says people are more likely to say yes when the charity they’re being asked to donate to meshes with the thing they’re buying.

“If I’m purchasing a pack of baseballs, and I see an option to round up for an after-school program that takes kids to play sports, you’re much more likely to say yes, because you identify with that story,” said Fineberg.

Another study on donating at checkout found that identifying with the person who’s asking for money also matters. People are more likely to donate if they like the service.