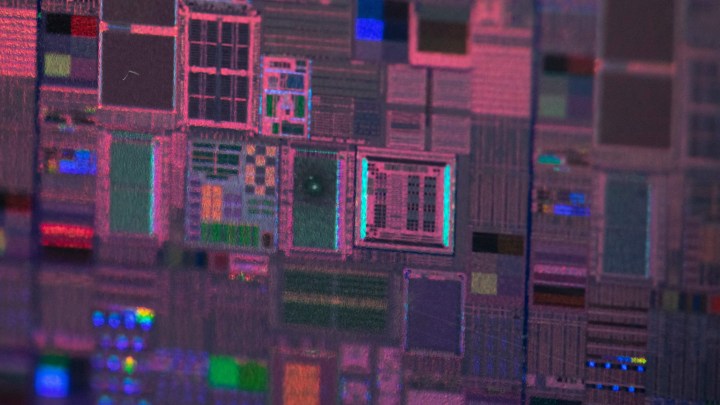 COPY
Lasers using neon gas etch circuit patterns on silicon wafers to make computer chips, like the ones above. Russia and Ukraine are major exporters of neon. Josep Lago/AFP via Getty Images

Lasers using neon gas etch circuit patterns on silicon wafers to make computer chips, like the ones above. Russia and Ukraine are major exporters of neon. Josep Lago/AFP via Getty Images
Listen Now

Those bright, glowing signs that say “Eat at Nick’s,” “Open” or “Yuengling” might be what people think of when they hear the word “neon.” But they consume a tiny fraction of the world’s supply.

“Neon signs are 1% or 2% of the world’s production,” said Richard Betzendahl, who runs a consulting firm that does market research on the gas. “I mean, demand is very small.”

Most of the world’s neon is used in a light source of a different kind: lasers. They’re critical to the process of manufacturing semiconductors. Russia and Ukraine are major exporters of neon, much of which is now unavailable.

That means the chip industry is now facing a shortage of a critical supply — at a moment when it’s already stretched to capacity.

“[The] excimer laser, which is the high-powered laser that could drill holes through metal and so forth, it needs neon,” Betzendahl said.

The laser etches circuit patterns onto wafers of silicon. “It’s creating … a puzzle piece,” said Nina Turner, a semiconductor analyst with IDC. “You’re taking these different patterns and putting them down on the wafer.”

Turner said that process is used to manufacture approximately 90% of the chips made today, including those used in cars, memory and power management — all areas where there are already chip shortages.

“I think companies are downplaying their worry [about a neon shortage],” Turner said. “But I do think they are putting contingency plans into place as we speak.”

Most companies have two or three months’ worth of neon on hand, Turner said. The Semiconductor Industry Association, a trade group for American chipmakers, said in a statement that the industry “has a diverse set of suppliers.”

That’s partly because it’s been in this position before: Eight years ago, the last time Russia invaded Ukraine, neon prices shot up.

“That was a bad time, and what happened back then was China — they put in a lot of neon capacity,” said industry consultant Betzendahl.

Even with Chinese plants capturing and exporting neon, Russia and Ukraine remain critical to the supply chain. Cryoin Engineering is located in southern Ukraine in the port city of Odesa. It exports neon to customers around the world, including in the U.S. It stopped production days ago, and shipments are already delayed.

Larissa Bondarenko is the business development director there. She’s concerned bombing will damage the company’s plant or key transportation infrastructure.

“There’s a high risk that the port will be destroyed, then the logistics will be much, much harder to restart,” she said, adding that she’s also worried about Cryoin’s workforce. She said that 80% of the company’s employees are men, who are now being called to defend the country.

Bondarenko and her family are still in Odesa. They go to their basement whenever they hear air raid sirens, which happen multiple times a day. Up until yesterday, they were planning to stay, hoping the war wouldn’t last long. But now they’re trying to evacuate.