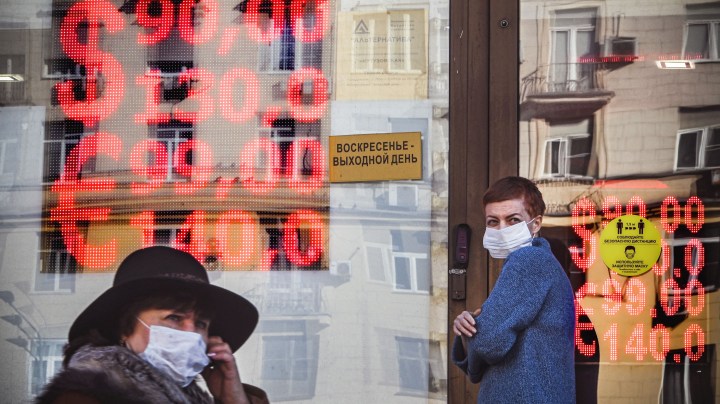 COPY
The ruble has lost about 25% of its value since Friday. Above, people walk past a currency exchange office in Moscow. Alexander Nemenov/AFP via Getty Images

The ruble has lost about 25% of its value since Friday. Above, people walk past a currency exchange office in Moscow. Alexander Nemenov/AFP via Getty Images
Listen Now

Sanctions against Russia are already having an impact on its economy.

The ruble, Russia’s currency, has lost about a quarter of its value since Friday. Lines have been stretching at some Russian ATMs as people try to withdraw their money. That’s driven fears about bank runs that made Moscow double interest rates to convince people to keep their money in bank deposits.

All this will have an impact not just on the economy but on the people in that economy, the ordinary Russian citizens.

There’s this old Soviet joke that gets told during periods of economic instability in Russia: How much can you get for a ruble?

“And the answer is a slap in the face,” said Michael Bernstam, a fellow at the Hoover Institution. He was also an economic adviser to the Central Bank of Russia right after the fall of communism.

Russians are familiar with a ruble in crisis, he said. The last time they experienced a currency collapse was in 1998, when the country defaulted on its debt.

Those memories are accelerating the panic to pull out cash before it runs out, before there are new limits on how much people can withdraw or to buy necessities before imports run out and shelves go bare.

Russia imports a lot of food, chemicals and machinery, Hyatt said. All that, when paired with a currency in freefall, will even affect the cost of what Russia itself produces — like wheat for bread.

“There are huge influences on that very simple process of producing the loaves of bread, getting it to the shelves of a grocery store, having it be affordable and having there be enough [for] everyone needing to access it,” Hyatt said.

And when you combine all these pain points — panic, a cratering currency, limited supplies and rising inflation — the economy could go rogue. There could be a black market for goods and services; business owners may prioritize selling to customers who have access to foreign currency, as opposed to the ruble. Life could get very difficult.

“You know, you have the average Russian experiencing something like this, and it’s a direct consequence of the recent war. Yeah, it’s meant to be painful,” said Jonathan Petersen, an economist at Capital Economics.

How long it takes for the pain to set in and how long it lasts depends on what Russia does next and whether there will be further sanctions.