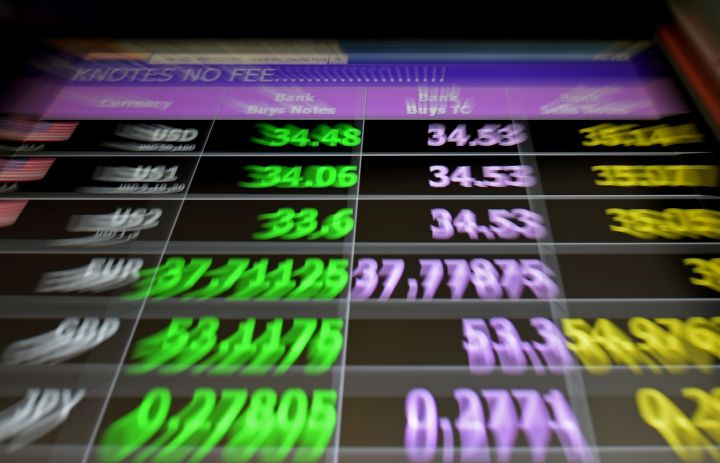 COPY
Russia is about to put a "hefty" stockpile of foreign reserves to the test. Pornchai Kittiwongsakul/AFP via Getty Images

Russia is about to put a "hefty" stockpile of foreign reserves to the test. Pornchai Kittiwongsakul/AFP via Getty Images
Listen Now

By building up its foreign reserve — a rainy day fund held in foreign cash — Russia has been preparing for some time to insulate itself from the sanctions imposed this week.

When a country’s own currency loses value, foreign currency can help with all sorts of things, including routine international trade, said Emma Ashford, a nonresident fellow at the Modern War Institute at West Point.

“Large stockpiles of foreign reserves just are very useful for helping to insulate yourself from global economic shocks,” Ashford said.

Russia’s foreign reserve stockpile is worth more than $600 billion. A hefty amount, according to Gian Maria Milesi-Ferretti with the Brookings Institution, who said we can trace this back to 2014, when Russia paid the price for annexing the Crimean Peninsula from Ukraine.

“Flows of foreign capital to Russia had become a trickle,” Milesi-Ferretti said.

To prevent that from happening again, the country has been socking away wealth in the form of euros, the Chinese yuan and gold. It can use those foreign reserves to prop up the value of the Russian ruble and keep its economy afloat — at least for a while.

“I would feel confident they could keep going for a few months, at least,” said Carol Osler, an economist at Brandeis University. “The bottom line is, if they don’t do anything to offset that, their money supply in the economy is going to shrink. They can’t just intervene once. They have to keep intervening.”

Osler says that’s where even $600 billion in foreign cash starts to look a little thin.