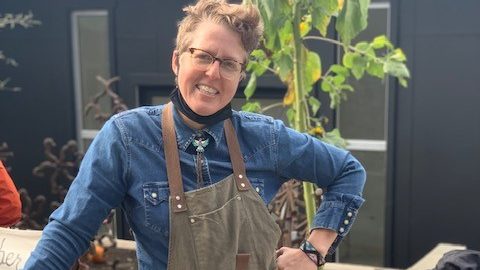 Tara Morgan lives on Vashon Island, in the Puget Sound of Washington state. She owns and operates C’Mon Barber, a haircutting business that operates in three parts: a mobile service, with Morgan visiting clients’ homes; a pop-up shop where people can come to Morgan’s chosen location; and a men’s grooming service.

Morgan made a career shift and went to barber school while receiving unemployment benefits during the pandemic. “The school actually directed me to our county unemployment assistance program, so they paid for more than half of my tuition.” She received additional help from other sources and, after her training was complete, started C’Mon Barber in June 2021.

There are challenges that come with being a traveling barber. “We have almost $5-a-gallon gas. That’s only available at three gas stations on the island,” she said. “It’s exorbitantly expensive to drive everywhere. I would say 99% of the time, I’m going to people’s homes.”

But sometimes work can turn into a social event when she visits a client’s home. “You’ve got kids running around, and everybody’s like, ‘Oh, do you have time to do mine?’ Or the neighbor kid sticks his head over the fence and is like, ‘Can I get one?’”

For Morgan, becoming a barber at almost 50 years old is the culmination of her favorite things about jobs she’s done in the past — moving around a lot, being creative and forming connections with people.

As for her goals, Morgan plans to open up her own commercial space and expand her business to include a service for straight-razor shaves, hot towel treatments and facial grooming.

Morgan bought a 1986 Ford Econoline step van, and, after refurnishing it, she plans to semipermanently park it at a local country store and farm, “where people can come and do their nursery shopping, and do their farm and boots shopping and buy seeds, and then come get a haircut and have a picnic.”