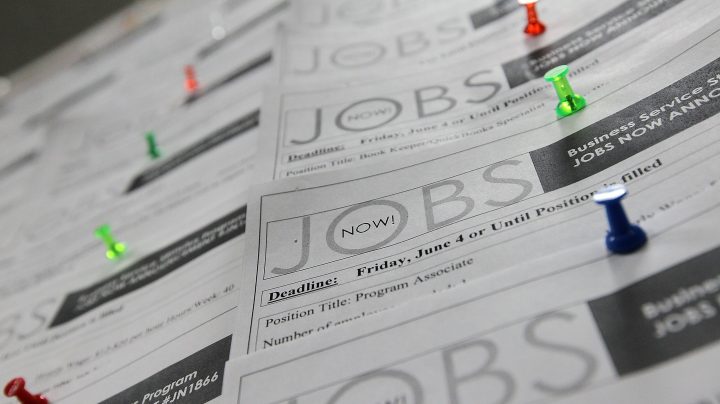 COPY
The Bureau of Labor Statistics collects data for its monthly jobs report by talking to businesses and individuals. Some folks it doesn't talk to? American Indians and Alaska Natives. Justin Sullivan/Getty Images

The Bureau of Labor Statistics collects data for its monthly jobs report by talking to businesses and individuals. Some folks it doesn't talk to? American Indians and Alaska Natives. Justin Sullivan/Getty Images
Listen Now

Update (Feb. 3, 2022): The Bureau of Labor Statistics will start posting employment data on American Indians and Alaska Natives in an online database on a monthly basis starting Feb. 4. This data will not appear in the monthly jobs report.

Friday, the federal Bureau of Labor Statistics will release its Employment Situation Summary, better known as the monthly jobs report. The bureau surveys individuals and businesses to estimate the number of people who are employed and unemployed, how many hours they worked the previous month and other metrics that influence economic policy and business decisions. But the report doesn’t include data about how American Indian and Alaska Native people are faring in the labor market.

Stephanie Tsosie of Tsaile, Arizona, is one person whose employment situation won’t figure into the report. In early 2020, she was working toward a bachelor’s degree in psychology from Diné College and, she hoped, a higher paycheck than she’d earned in the past as a home health aid.

But when COVID-19 reached the Navajo Nation, those goals took a back seat to her two high schoolers’ education.

“I figured I’d be able to get online at the same time my kids are online, but that was not the case,” Tsosie said. “Having two people already on virtual learning was taking up a lot of the broadband in our home. So I had to reevaluate the situation.”

Tsosie took a break from school with plans to reenroll after her daughter’s graduation. But then her grandmother came down with the virus and didn’t survive.

“It has been very hard,” Tsosie said. “She was a big influence in keeping our traditions alive and our family together.”

With her grandmother’s death came a reshuffling of family caretaking responsibilities, many of which fell to Tsosie.

“Me being the eldest granddaughter in my family, now I have to manage not just my own life and my own home, but I have to do the same for my aunts and my uncles. My education and my career goals had to be put on hold.”

The same is true for Dean Wallowing Bull of Lame Deer, Montana — another person whom the BLS hasn’t heard from and a COVID long-hauler.

“After I got sick, I had a persistent cough for about six months, and it caused me to have anxiety and brain fog, and then my grip got messed up on my hand. It’s just not coming back fully, my grip,” Wallowing Bull said.

Those lingering symptoms, coupled with a fear of contracting the virus again and bringing it home to his aging parents, have kept Wallowing Bull out of the construction workforce for nearly two years.

Without solid data, it’s hard to measure the pandemic’s toll on the Indigenous workforce. But that erasure is nothing new.

“It creates the situation of a data desert in Indian Country,” said Casey Lozar, vice president at the Federal Reserve Bank of Minneapolis and a citizen of the Confederated Salish and Kootenai tribes.

In national reports, Lozar said data about Native Americans is often relegated to the “other” category.

“That’s typically where we land, or there’s an asterisk in datasets that says ‘not enough observations were collected.’”

That’s what happens to the small amount of data about Native people that’s collected in the big, national survey that feeds the jobs report. It’s not considered robust enough to include in the monthly jobs report, and instead has historically been posted to a separate, online dashboard on a yearly basis. Starting Feb. 4, the Bureau of Labor Statistics will begin updating that dashboard on a monthly basis.

The data is so limited because Native peoples’ small share of the population makes them difficult to capture through random sampling. So does sparse broadband access on rural reservations and many Native people’s distrust of outside data collection efforts.

“We don’t have the data to make those critical decisions at the tribal government level, and it doesn’t give other policymakers a deep understanding of what’s happening in Indian Country,” Lozar said. “We see the opportunity to arm leadership to make evidence-based decisions.”

Using raw data from the Bureau of Labor Statistics that would otherwise go unreported, the Minneapolis Fed’s Center for Indian Country Development publishes its own Native American Labor Market Dashboard and has plans to expand these efforts.

The data doesn’t tell the full story of Native employment and unemployment, Lozar said. But it gives us something to work with.

“Unemployment rates for American Indian and Alaska Native people are typically around double the national average,” he said.

That tracks with what Robert Maxim, a senior researcher at the Brookings Institution and a citizen of the Mashpee Wampanoag tribe, has found mining other datasets for unpublished clues about American Indian and Alaska Native economic outcomes.

“Native Americans had their hours and pay cut, lost their jobs and lost their health insurance at higher rates than any other ethnic group during COVID-19, and they saw the highest levels of temporary and permanent business closures,” Maxim said. “So there’s a level of economic stress that Native people are facing that’s higher than any other ethnic group in the United States.”

To gather enough data points to lift Native people out of the “other” category, Maxim said the government needs to rethink its data collection practices.

“In the short run, there needs to be a discussion around oversampling in Native communities across all regular government reports,” Maxim said.

Beyond that, he said tribes need a meaningful seat at the table in these efforts.

“Tribes have been advocating for years to be able to run data collection on their own,” Maxim said. “The U.S. government needs to not only respect data sovereignty, but actually empower tribes to go collect their own data, leverage it for their own needs and engage with these tribes on an equal, government-to-government basis.”

At the Minneapolis American Indian Center, Brian Joyce, who heads up the workforce services program, said demand for job-seeking help has been low since the start of the pandemic.

“We were expecting a rush of clients looking to get back into the workforce in early 2022, but we didn’t see that influx,” Joyce said.

Joyce can’t be sure what’s keeping folks home but suspects the high COVID-19 death rate among Native people has something to do with it. He said some Indigenous would-be job seekers have died or taken on extra caretaking responsibilities after losing a family member. Many others, he said, likely fear contracting the virus at work.

“Especially in Native communities, I think COVID is still the No. 1 factor in why people are not actively seeking employment,” Joyce said.

Stephanie Tsosie is back in class and on track to graduate soon, and Dean Wallowing Bull is feeling ready to venture back into the job market. But they’re hitting the same roadblock: a lack of jobs in their tribal communities that could force them to relocate.

“The job market here is basically nonexistent. I have opportunities available, but that involves leaving my family,” Wallowing Bull said. “Leaving the reservation is going to be hard, but I realize that I need to go to work now.”

That’s another unique challenge that isn’t reflected in federal data and won’t be part of our monthly national conversation about work.