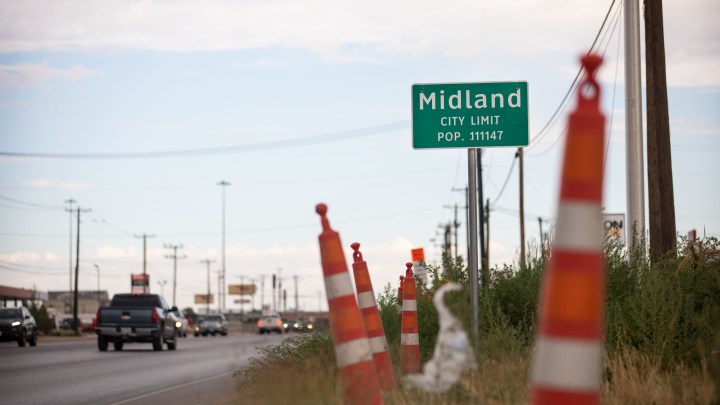 COPY
Unemployment in Midland, Texas, has dropped since the summer, but the city's labor market remains tight. Montinique Monroe/Getty Images
A Warmer World

Brent crude oil futures were trading at $85 a barrel Wednesday and West Texas Intermediate at $83, which historically would have oil producers scrambling to drill.

While we’ve seen a steady uptick in the rig count in places like the Permian Basin, it’s nothing like what we would likely have seen decades ago.

But any uptick in oil and gas activity is welcome news for the economy of Midland, Texas, and the folks who live and work there.

The unemployment rate in Midland is 4.5%, down from 6.7% over the summer, thanks in no small part to more activity in the oil fields.

Grant Swartzwelder, president of OTA Environmental Solutions, an oil field services firm in the area, said there are jobs to be filled, but the tight labor market is making it tough to do so.

“When Whataburger will pay $15 an hour just to flip burgers, you know, that trickles all the way through to some mechanics” Swartzwelder said.

But he said it’s not fast food restaurants he’s worried about. Big Oil companies poach his workers with higher pay.

Swartzwelder’s been in the industry here for 37 years and said in the past when oil was $80 a barrel, people migrated here for work.

“In boom times, you would see license plates from all over the 50 states here in Midland, and you’re not seeing that.”

He said that right now, if locals don’t want the jobs, most aren’t getting filled.

“Whether folks are just tired of the bust-boom cycles, and just saying, ‘You know, I don’t need that extra money, I’ll just stay put,’” he said.

The United States is also trying to slowly wean itself off of fossil fuels, so oil and gas jobs could be short lived.

“It’s hard to see how the workers that are out there doing that type of work are just going to drop everything and go work in the renewable sector. It’s not really that simple at all,” Golding said.

A transition away from oil and gas tax revenue wouldn’t be simple, either.

“Nearly about anybody out here is going to be over 50% of their tax base is solely going to be minerals,” said James Beauchamp, who runs the Midland-Odessa Transportation Alliance.

Those mineral leases pay for not only local needs, he said, but contribute a big chunk of cash to the state budget, as well.