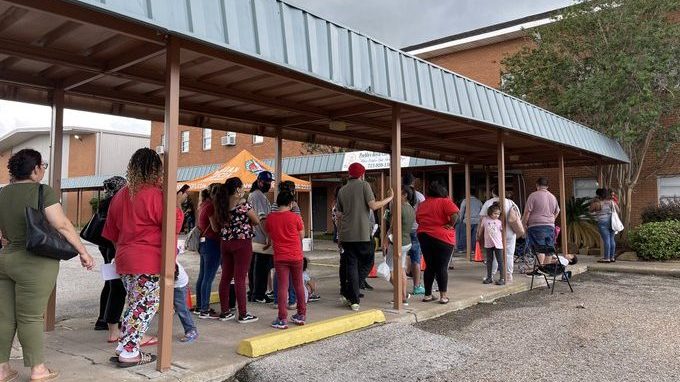 Ebanisha Wiley has been on the brink of eviction for months. She lives in Montgomery County, an area north of Houston where officials decided to return much of their federal rental assistance money.

The federal government is working on an effort to reallocate rent relief money, taking it from communities that haven’t spent theirs and redistributing it to others that have. In late November, officials in Montgomery County voted to return $7 million, almost one-third of the money that was meant to help renters struggling to make ends meet during the pandemic. The county had spent less than 2% of its allocation, according to federal data.

The day after commissioners voted to return the money, Wiley stood outside the Montgomery County courtroom where a judge had ruled that she could be evicted.

“I don’t have any parents, grandparents, any immediate family I can turn to. It’s just me and my kids. It’s a struggle that wouldn’t nobody understand unless they were in my shoes,” Wiley said.

Wiley wasn’t the only one facing eviction that day. There were five other cases on the docket involving renters who said they had applied for state rent relief and had not yet received it.

A spokesperson for County Judge Mark Keough, Montgomery County’s chief executive, said in a written comment that a county program used more than $6 million in Coronavirus Aid, Relief and Economic Security Act funds in 2020 to distribute emergency rental, utility and mortgage assistance to more than 1,700 homes. They added that residents had been applying to the state rent relief program, so there wasn’t much need for the county-level program.

Wiley, a single mom with five kids, said she looked for a Montgomery County rent relief program but couldn’t find one. She applied for statewide relief months ago but hasn’t been approved.

It’s not surprising Wiley couldn’t find a way to apply for county funding, said Jay Malone, political director of the Texas Gulf Coast Area Labor Federation. For over a year, he’s partnered with nonprofits and local government officials to host rent relief sign-up events throughout the Houston region where people facing eviction can get help.

“We didn’t reach out to Montgomery County because there was no evidence that there was an active program. There was no platform to apply,” Malone said. “So our understanding was that there wasn’t a program that was active.”

Montgomery County officials said they still have $10 million in emergency rental assistance and they’re planning to distribute it through next year. An online portal launched in November has received more than 500 applications.

Meanwhile, the statewide rent relief program has closed to new applicants after running out of money. It distributed over $25 million to people in Montgomery County.

Diane Yentel, president and CEO of the National Low Income Housing Coalition, said it’s likely that the federal government will get back a significant amount of money to redistribute for rent relief.

“There’s probably about up to $1 billion at stake that may be reallocated to other communities,” Yentel said.

Federal officials are having conversations with underperforming state and local rent relief programs, encouraging them to give up those funds voluntarily, Yentel said. But she said some areas are refusing money for what appears to be ideological reasons.

“We are seeing some states and localities suggest or outright refuse to accept those additional funds, saying that there is no remaining need when there clearly is,” she said.

In Texas, some counties have spent most of the federal rental relief funds they received.

In Harris County, which includes the city of Houston, there’s a joint program to distribute the rent money. It has handed out over $250 million, and the program is now out of money. The program has requested another $250 million from the Treasury Department.

Ebanisha Wiley hasn’t received rent relief money yet, but she’s managed to stave off eviction — temporarily — by appealing an eviction judgment. A hearing on her case is set for February.