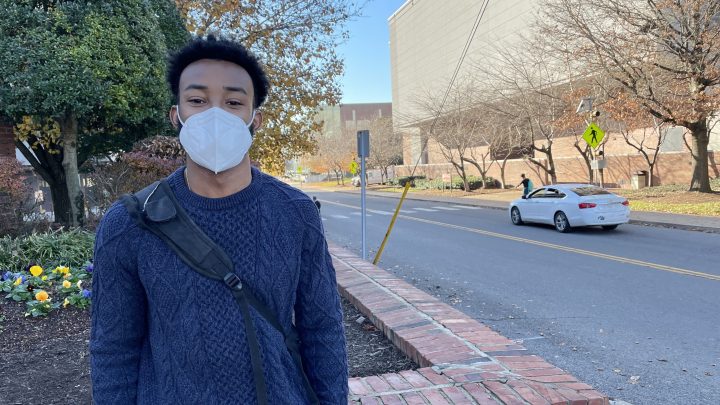 What will a $10,000 gift mean for students at Meharry Medical College?

COPY
Meharry master's student Andreas Nelson said being given $10,000 means the school trusts students to use the money in ways useful to them. Nelson hopes to attend dental school, which leaves the average Meharry student with $280,000 in loans. Blake Farmer/WPLN News

What will a $10,000 gift mean for students at Meharry Medical College?

Meharry master's student Andreas Nelson said being given $10,000 means the school trusts students to use the money in ways useful to them. Nelson hopes to attend dental school, which leaves the average Meharry student with $280,000 in loans. Blake Farmer/WPLN News
Listen Now

Just before students at Nashville’s Meharry Medical College went home for Thanksgiving, the college’s president, Dr. James Hildreth, emailed them a video message that felt a little hard to believe.

Students were told to expect a direct deposit the next day or pick up a check in person. Hildreth, an infectious disease expert who helped lead Nashville’s pandemic response, explained that this gift, with no strings attached, was money from the CARES Act. He only asked that they be “good stewards.”

Meharry’s administration decided to give a portion of its CARES Act funding directly to future doctors, dentists and public health researchers, nearly 1,000 students in all.

In part, it’s recognition that Meharry’s students had already been more involved than many in the pandemic response, staffing Nashville’s COVID testing and vaccination sites. But it is also an investment in their future careers.

Meharry graduates more Black physicians than almost any other U.S. school and half of its MDs go into the high-demand, but lower-paying field of primary care.

“We felt that there was no better way to begin distributing these funds than by giving to our students who will soon give so much to our world,” Hildreth said.

Cheers erupted in the library as students clicked the video link. Andreas Nelson said he fell silent, staring at his banking app in disbelief.

“I was literally lost for words”

“$10,000 was sitting just in my bank account. It was astonishing,” he said, as students zipped across campus to take their finals. “I was literally lost for words.”

The Chicago native is finishing a master’s degree at Meharry with hopes of entering the dental school. It’s a program where the average student loans total more than $280,000; $10,000 won’t make much of a dent in the debt.

But, he said, the money in his pocket eases his top concern of making rent each month and that it feels as though he’s being treated like an adult.

“It’s motivating,” Nelson said. “Because that means they have trust in us to do with this money whatever the cause may be — whether it be student debt, investing or just personal enjoyment.”

Across the board, students at HBCUs rely more on student loans than their peers at other schools, partly because HBCUs have less money for scholarships. Roughly 80% take out student loans, according to an analysis by UNCF, and they borrow considerably more.

Meharry was founded about a decade after the Civil War to train formerly enslaved people in medicine, so they could help other newly-freed Black citizens. But the 145-year-old institution has consistently struggled financially — and so have its students.

The reasons are rooted in the country’s racist past, which has left the institutions with less money for scholarships. Families have less wealth to tap into as well, with Black households averaging just $17,000 net worth — one-tenth of the average for white families.

Meharry’s average student debt is far higher than other area schools of medicine at Vanderbilt University and the University of Tennessee, representing both private and public institutions.

Virtually all colleges and universities received allotments under the CARES Act. More than 20 HBCUs have used the money to erase outstanding tuition balances; some have canceled student fees.

But Meharry, which is one of the few standalone HBCU graduate schools, is the rare case of cutting checks for students.

“These young people are rising to medical school against all odds,” said Lodriguez Murray, who leads public policy and government affairs at UNCF. “Of course they have to borrow more, because people who look like them have less.”

Students at Meharry can now apply for $100,000 scholarships. The $34 million from Bloomberg Philanthropies is also going to other kinds of financial support.

The school is now offering, for no additional fee, expensive test-prep services through a Boston-based company MedSchool Coach. The service, which entails paying a doctor by the hour to help with studying, can cost thousands of dollars.

While the price is often out of reach of students tight on cash, acing the benchmark exams toward board licensure is key to landing coveted fellowships, qualifying for lucrative specialties or just finishing on time. And Meharry’s four-year completion rate of roughly 70% is well below most schools. The national average is around 82%.

For some, Murray said, a $10,000 windfall may make all the difference to whether they cross the finish line and become a doctor who can afford to repay all the debt they’ve taken on.

“Many of those students are borrowing a lot of money to complete their dream, and to become relatively high earners in the future,” Murray said. “The fact that these students are largely coming from lower socioeconomic backgrounds means that the funds that Meharry turned around and gave to the students are particularly impactful.”