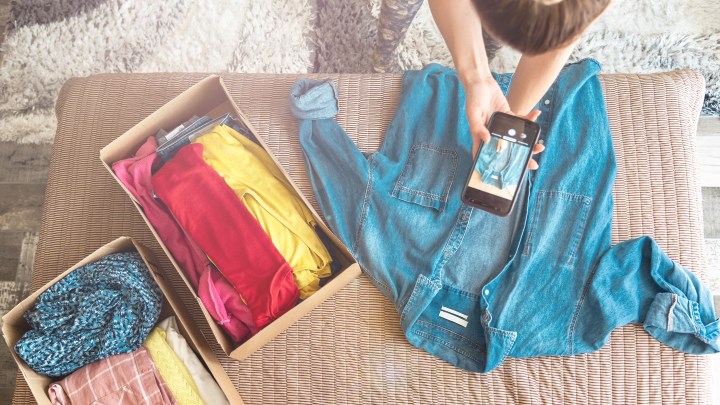 COPY
As consumers scramble to get holiday gifts, those in Buy Nothing groups can give and receive freely in their local area. Anna Gorbacheva via Getty Images

As consumers scramble to get holiday gifts, those in Buy Nothing groups can give and receive freely in their local area. Anna Gorbacheva via Getty Images
Listen Now

Shoppers are out in force for Black Friday. The National Retail Federation predicts record holiday sales this year.

But there’s a growing number of Americans who are opting out of all the consumer frenzy — and not just for the holidays.

The Buy Nothing Project is a hyperlocal gift economy where neighbors give and receive freely. Community groups exist on Facebook and now a new app, and the community has ballooned in size since the start of the pandemic.

I’m in my neighborhood Buy Nothing group in San Diego. This week, people gave away highchairs, dress clothes and exercise weights.

Group members can also post requests, as in, “Before I go out and buy X, does anyone have one to give away?”

“You know, I put it out there, ‘Hey, I’m looking for age-appropriate gifts,'” said Alice D’Amore, who often Christmas “shops” from her Buy Nothing group in Portland, Oregon.

This year, her two sons will get toy robots that came from a neighbor.

“And sometimes people are like, ‘I need to clear this basement because I’m getting new toys coming in,'” she said. And when her boys outgrow the robots, D’Amore will pass them on.

Liesl Clark, co-founder of the Buy Nothing Project, calls this a collective “ah-ha” moment. “People are buying nothing in hordes.”

The groups meet a real economic need for some; for others, it’s a chance to declutter and jump off the consumer hamster wheel.

“You can actually seek out an alternative economy, like a gift economy,” Clark said.

She said that feels good and is better for the environment and our pocketbooks.