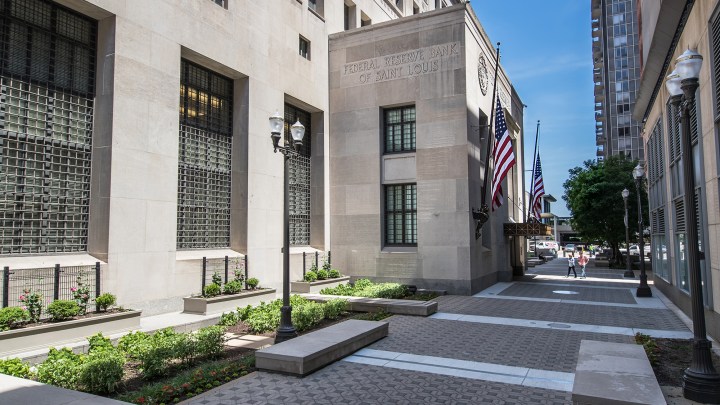 It’s been 30 years since the start of the Federal Reserve Economic Data, or FRED, an online database within the Federal Reserve Bank of St. Louis. The site contains more than 800,000 data series from over 100 different sources, making it something of a one-stop shop for people trying to understand the economy.

“We can take the data from multiple sources and put them all on our website, so users can go and see what the latest unemployment rate looks like or what inflation is doing nowadays,” said Yvetta Fortova, the FRED manager and its “data champion.”

Originally existing as a dial-in electronic bulletin board, FRED went online in 1995 — paving the way for the platform as it stands today.

Fortova spoke with “Marketplace” host Amy Scott about the database. The following is a transcript of the interview. To listen to their conversation, use the media play above.

Amy Scott: What’s some of the more “out-of-the-way” data that you might find on the site?

Yvetta Fortova: On the historical side, for example, we have a really neat data set from the National Bureau of Economic Research, and it’s a data set with historical macroeconomics data. But really, you know, the term “macroeconomics” can be intimidating to people. But there are some really exciting series, such as shipments of kitchen sinks and lavatories to the United States in the times of the industrialization period. There was a peak around the 1920s when a lot of people in the U.S. were in need of toilets, and [for the] greater good, they also thought about a sink. So those two data series are highly correlated.

Scott: Okay, I’m totally looking that up. What do you wish you had more data on?

Fortova: Oh, wow, how many wishes can I have?

Scott: Let’s give you three wishes. We’ll go with the classic.

Fortova: I would probably like to see data looking into the future, so projection data. And another type of data that I would be interested in is more regional data. At FRED, our smallest unit of region is county, but really going down all the way to zip code or census track, I think, that would be really neat. Probably last but not least, it will be interesting to also look into institutional level data. So it’s just not an aggregate of some sort, but it can be particular data on like, sales in specific stores or information about that. So, I’m more on a socioeconomic side of things.

Scott: So what do you know about your users — besides the usual suspects, economists and researchers and journalists like me? Are regular folks turning to FRED, or should they be for some of the economic decisions in their lives?

Fortova: Yes, definitely. We welcome everybody. And I think that is also our everyday struggle, is that our product is visited by so many users with so many sophistication levels, that sometimes, you know, developing our products to the next level makes it somewhat of a challenge. We really welcome our users from the educational sector, academia, particularly students. Sometimes they even email us to see if we will be able to answer homework questions for them. But we see our student users as kind of an investment into the future because once these users are out of college, and, you know, they’re looking into buying a house and getting a quote for a mortgage, for example, they can go on FRED and see what the average mortgage rate is. And then they can kind of assess how well are they doing compared to the typical mortgage rates. So we have a wealth of data that I believe can make our users better in making better decisions in their lives.