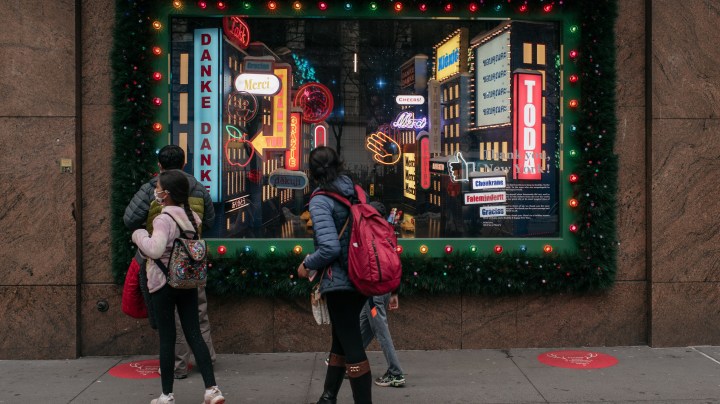 COPY
Shoppers look at a holiday display in a New York City shop window. Despite supply chain issues and inflation, the National Retail Federation expects holiday spending to jump up to 10.5%. Scott Heins via Getty Images

Like it or not, we’re already well into this year’s holiday shopping season. We’ll learn more when we get the latest consumer spending numbers from the Commerce Department next week.

The National Retail Federation estimates that holiday spending will jump by as much as 10.5% this year, despite all the higher prices and supply chain problems we keep hearing about.

So just how are people feeling about spending this holiday season?

A little over a week ago, Jack Kleinhenz bought a bunch of toys for his three grandchildren: Legos, magnetic tiles that you can build things with and some toy cars made out of interlocking plastic pieces.

“Things that they can rebuild and be creative and make new things out of, rather than using the same thing over and over again,” he said.

When he’s not shopping for toys, Kleinhenz is the chief economist at the National Retail Federation. He’s found that consumers are eager to spend money right now, thanks to higher savings rates, government relief and rising wages.

In fact, he said the toy store he visited had already been gearing up for a busy season.

“I was told that they had anticipated some of this extraordinary demand. Their inventory was up considerably,” Kleinhenz said.

In Buffalo, New York, Tracey Mangano has been doing her shopping early because, she said, those inventories might not last. Mangano owns a gift shop, Cardsmart Greetings, and has been dealing with clogged inventory pipelines herself.

“Some of the products we’re supposed to get for the Christmas catalog aren’t coming in until the beginning of December. Which in that case is kind of late,” she said.

“Like, I’ve heard so many people say ‘Oh, I’ve ordered some furniture for my new home, and it’s going to take six months to get it,'” Blake said.

Either way, Blake said she expects holiday sales this year to reach levels we haven’t seen since 2019 — before the pandemic.