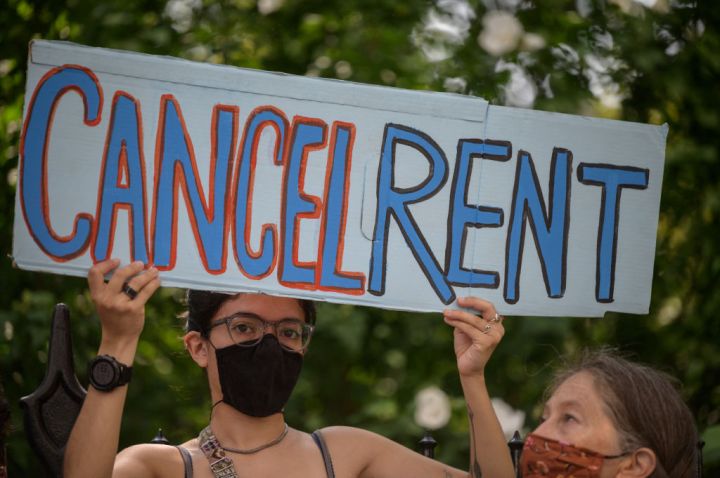 Demonstrators in New York City rally for an extension of the state's eviction ban and rent cancellation. Ed Jones/AFP via Getty Images

Demonstrators in New York City rally for an extension of the state's eviction ban and rent cancellation. Ed Jones/AFP via Getty Images

It’s Sept. 1. Which means rent is due for millions of people around the country. And for those who are behind and struggling to pay, there are no more federal protections against eviction.

That could have consequences for public health.

A study published this week in JAMA, the Journal of the American Medical Association, found a clear connection between eviction bans expiring and risk of COVID-19 rising.

In March and April of 2020, the early days of the pandemic, 43 states and Washington, D.C., banned evictions to keep COVID from spreading.

“I’m now convinced that this public health policy worked,” said Sebastián Sandoval-Olascoaga, a doctoral student in urban economics and policy at the Massachusetts Institute of Technology and a researcher on the JAMA study.

A federal moratorium on evictions went into effect last summer. In the 26 states that allowed evictions to resume before that happened, the risk of COVID infection nearly doubled compared to states that kept bans in place.

When we think about eviction, we tend to associate the infection risk with the people who will be homeless, Sandoval-Olascoaga said. But after it happens, the risk also applies to “the ones who are not at risk of being evicted.”

The more people that carry COVID, a communicable disease, the more it’s a risk to everyone, said Dr. Atheendar Venkataramani at the University of Pennsylvania, who also worked on the study.

He said the risk of getting COVID increased most for people with preexisting health conditions or who live in low-income areas. “Some patients will say, ‘I have to work three jobs and I have to take the subway. I have no choice, I don’t have the option to not work,'” Venkataramani said.

With the more contagious delta variant circulating, Megan Hatch, a professor of urban studies at Cleveland State University, is concerned.

There are also studies that show that “places with highest eviction rates also tend to have the lowest vaccination rates, so we’re seeing all these things compounding,” Hatch said.

Several states and cities still have eviction bans in place. Most don’t.