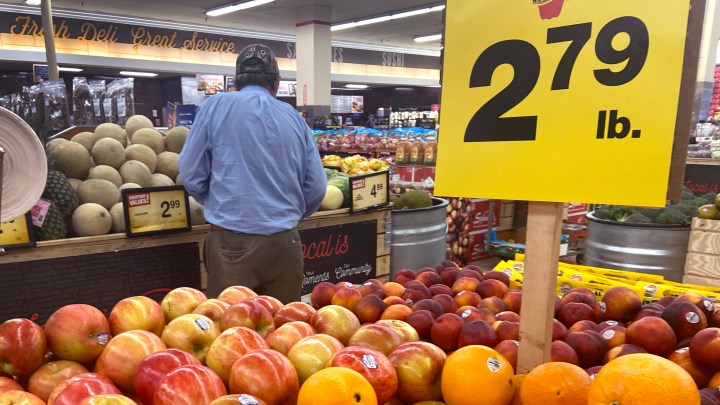 COPY
A New York Fed survey shows consumer expectations of inflation over the next year have reached a new high. Scott Olson via Getty Images

A New York Fed survey shows consumer expectations of inflation over the next year have reached a new high. Scott Olson via Getty Images
Listen Now

The Bureau of Labor Statistics released the latest consumer price index Tuesday morning. It shows that inflation continued to accelerate in June, with prices up 5.4% from a year earlier. The rise was mostly driven by gas and big-ticket items, like used cars and airline fares.

The Federal Reserve has been saying all of this is transitory and that things will cool off. But that’s not the perception among consumers, according to a survey by the Federal Reserve Bank of New York. It shows consumer expectations of inflation over the next year have reached a new high.

Consumers are generally not very good at making accurate predictions about inflation, about the cost of housing or a loaf of bread. But that’s not the point of surveying their expectations.

“We want to know if their expectations are changing, and as a result of this change in expectation, their behavior is going to change,” said Olivier Armantier, an economist at the New York Fed.

Behavior change could mean bigger financial leaps, like taking out a loan for a house, or smaller ones, like buying a TV now because you think the price will go up soon.

“This is going to increase demand today. And, you know, as demand increases for goods and services, then prices are also going to increase,” Armantier said. “So this is a self-fulfilling prophecy.”

When people anticipate inflation, they actually cause it. And it just snowballs from there.

“Once you start noticing certain prices increasing, then, yeah, it makes sense that you would pay attention to other price changes,” said Haverford College economist Carola Binder.

And it’s hard to ignore what’s right in front of you. Most people drive by gas station signs every day, which reflect steadily rising prices. There are also niche versions of this.

For Binder, it’s baby strollers. Her own double stroller just broke, and she’s waiting for a warranty replacement. In the meantime, she’s reminded of how much they cost every time she takes her four kids out without one.

“Whatever we do in our world, in our reality for a sense, places us in having certain perceptions about prices,” said Francesco D’Acunto, a professor of finance at Boston College.

When perception feeds reality, he said, reality doubles down. Higher prices make people ask for higher wages. “Then of course the producers are forced to increase wages, and it will increase prices even more,” he said.

So while we look to the Fed and economists for answers, D’Acunto said they’re looking to us for answers too.