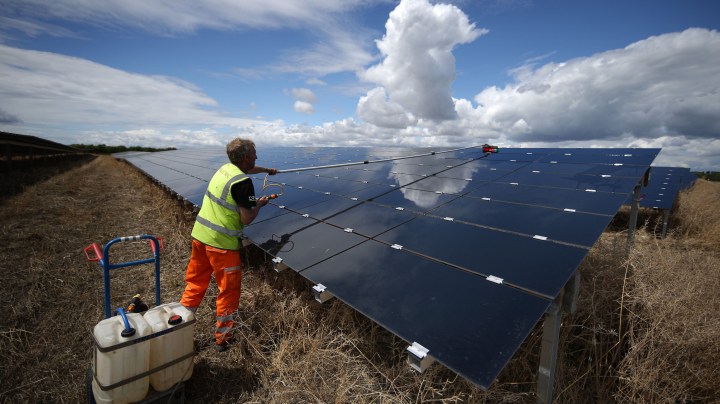 COPY
The transition to clean energy would be a net positive economically but easier said than done. Peter Macdiarmid via Getty Images

The transition to clean energy would be a net positive economically but easier said than done. Peter Macdiarmid via Getty Images
Listen Now

A new report from the Clean Energy Futures project — a collaboration among researchers from Harvard, Syracuse University, Georgia Tech and others — found that a U.S. transition to 80% clean electricity by 2030 would cost $342 billion.

It’d be a costly switch, but it would produce a net benefit of more than $1.4 trillion.

So, it seems like a no-brainer to begin making that transition immediately, right? It may not be that simple.

With drought and wildfires in the West and tropical storms and floods in the Northeast, people have never been more aware of the need for action on climate change.

Even so, many Americans feel the problem’s too big for individual action to make much difference, according to Kathy Fallon Lambert at Harvard, a lead author of the study.

“And in some ways, that’s true,” she said. “A problem of this scale is exactly the kind of problem that government action is meant to address.”

The study looked specifically at the costs and benefits of removing carbon emissions from the production of electricity.

“If you’re talking about decarbonizing the electricity sector, you’re talking about eliminating the dominant sources of air pollution in this country,” said Charles Driscoll, a professor of civil and environmental engineering at Syracuse University and another lead author of the study.

That decarbonizing would lead to less asthma, fewer heart attacks and other health benefits, Driscoll said.

From a practical standpoint, there’s another good reason to start with electricity too, said Jason Bordoff, co-founding dean of the Climate School at Columbia University.

“Some things are harder to decarbonize, like steel and cement and airplanes. But we know how to decarbonize most, if not all of, electricity,” he said.

For a long time, Bordoff said, people talked about climate change as something in the distant future that affected places far from home, like the Arctic. Events like the recent heat wave in the Pacific Northwest have helped change the conversation.

“It’s no longer a question of whether this is a problem. But let’s start talking about what we do about it,” Bordoff said. “There may be disagreement ideologically on that and how much you have private market solutions versus government regulation or something else. But let’s acknowledge we have a real problem.”

To solve it, he said, the government must incentivize industries to act swiftly in the move away from carbon.