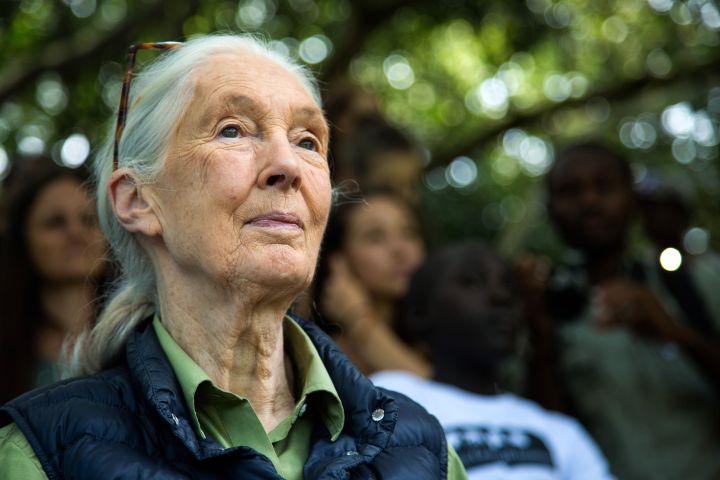 When Jane Goodall found out she’d won the 2021 Templeton Prize — which honors those whose contributions to society lie at the intersection of science and spirituality, and whose laureates include Mother Teresa and the Dalai Lama — the scientist and conservationist was surprised.

“But I will say that the financial prize that comes with it will really help to further some of our programs with the Jane Goodall Institute,” Goodall said in an interview with “Marketplace Morning Report” host David Brancaccio.

One of the programs that will benefit from the £1.1 million, or $1.56 million, award is Roots & Shoots, the youth program Goodall founded in 1991 that encourages students to engage in projects in their own communities that benefit people, animals and the environment.

“[The] main message is each one of us makes an impact on the planet every single day, and we get to choose what sort of impact we make,” she told Brancaccio.

She also said she’ll likely set aside some of the money for her own retirement — although, she said, “I’m not going to retire until I’m senile.”

David Brancaccio: First of all, congratulations.

Jane Goodall: Well, yes, it was a real surprise, knowing all of the different people who’ve had this prize in the past. But I will say that the financial prize that comes with it will really help to further some of our programs with the Jane Goodall Institute.

Brancaccio: Part of your institute has a youth-oriented program. What’s the idea — maybe helping to set up an endowment?

Goodall: The Roots & Shoots program I began in 1991. [The] main message is each one of us makes an impact on the planet every single day, and we get to choose what sort of impact we make. It’s in 68 countries, growing all the time. And so the money — some of it is earmarked for the struggling Roots & Shoots program in Greece, and some of it for Nepal, because of COVID-19.

Brancaccio: Now, Dr. Goodall, you’re probably going to tell me you have no plans to retire. But, you know, personal finance experts keep telling us we need to plan for our later years. Please tell me you’re going to use at least a bit of the prize money to help with your own financial security.

Goodall: So the little bit of money I have, it’s helped my grandchildren into college. It helps young Tanzanians stay through high school. So it’s very good to top that up. And I suppose that will help my old age. I’m not going to retire until I’m senile.

Brancaccio: Goodall, who’s 87, told me she’d been chatting with a previous winner of the Templeton Prize.

Goodall: So I said, “What did you do with your money?” And he said just that. He said, “Well, they told me to put some of it aside for my retirement.”

Brancaccio: You haven’t been able to travel, I don’t think, during this terrible year that we’ve just been enduring with pandemic, but how have you been faring in getting your message out during a time when you can’t really be there in person?

Goodall: Well, I have to say that, at first, I was frustrated and angry. Then I thought, “Well, that’s not helping anybody. It’s certainly not helping me.” And so we created virtual Jane. And I have to say, virtual Jane has been busier than I’ve ever been in my entire life. I’m sometimes in about four countries in a single day.