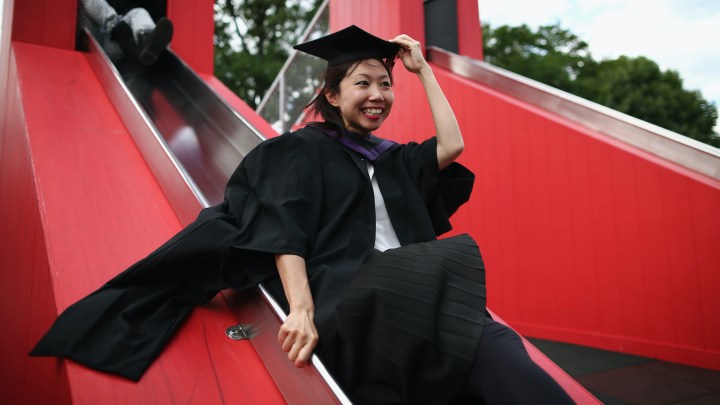 COPY
Graduating helps. About three-quarters of the job losses during the pandemic occurred among people who lack bachelor’s degrees, according to an employment researcher. Dan Kitwood/Getty Images

Graduating helps. About three-quarters of the job losses during the pandemic occurred among people who lack bachelor’s degrees, according to an employment researcher. Dan Kitwood/Getty Images
Listen Now

A new survey on household financial well-being from the Federal Reserve finds starkly diverging economic realities in America, with some workers improving their finances during the pandemic as some of the most vulnerable suffered the worst damage.

If you draw that pattern, the sharp upward and downward lines illustrate the “K-shaped” economic recovery we’ve talked about.

The disparities have grown along racial and gender lines. But perhaps the most dramatic split is the one between more and less educated workers.

So what’s the value of a college degree in the post-pandemic economy?

But the opposite was true for folks without a high school degree, and the gap between these groups has widened by 10 percentage points since 2019.

“What you have is a bit more stability at the upper end — B.A. and above — and a lot more instability below,” said Mike Horrigan, president of the Upjohn Institute for Employment Research. He said about three-quarters of the job losses during the pandemic, as in retail and tourism, occurred among people who lack bachelor’s degrees.

Inequities had already grown over recent decades, said Anthony Carnevale at Georgetown’s Center on Education and the Workforce. “The harsh reality now is that you’ve got to have at least some college to get a decent job.”

But he said simply telling people to go to college is not the answer. “The education system is reproducing race and class advantages across generations. And that’s a very serious problem going forward,” Carnevale said.

People with the most privilege continue to have the greatest access to higher education. Colleges need students who can afford to pay more, and those already well-off students often reap greater benefits from their degrees, according to Kathryn Zickuhr at the Washington Center for Equitable Growth.

“We know that pursuing a college degree is a large financial risk for the individual. So for instance, Black college graduates owe more student debt at graduation, and we know that it might not pay off,” she said.

That’s because the more you borrow to go to college, the more the debt eats into those increased wages, if you graduate.