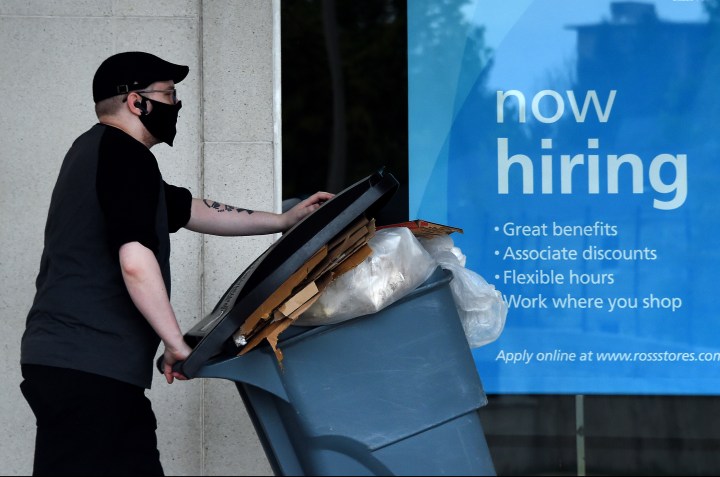 Kai Ryssdal and Maria Hollenhorst May 5, 2021
Heard on:

COPY
The number of job postings on Indeed is 22% higher than it was before the pandemic. Photo by Olivier Douliery/AFP via Getty Images

Kai Ryssdal and Maria Hollenhorst May 5, 2021
Heard on:

The number of job postings on Indeed is 22% higher than it was before the pandemic. Photo by Olivier Douliery/AFP via Getty Images
Listen Now

Friday’s jobs report from the Bureau of Labor Statistics will mark one year since the release of one of the worst jobs reports in U.S. history, which showed the economy had lost 20 million jobs in a single month.

As employers add more and more jobs to the economy, “Marketplace” host Kai Ryssdal spoke with Chris Hyams, CEO of the job search site Indeed (a Marketplace underwriter), where the number of job postings is now 22% higher than it was before the pandemic. The following is an edited transcript of their conversation.

Kai Ryssdal: So let me ask you actually to sort of draw on the insights that you get from your data and your experience running this company, whose job fundamentally is to match employers with people who want to work at these companies and vice versa. What’s the relative balance of power now on either side of the labor market equation?

Chris Hyams: So I think there’s really not one story that explains the entire labor market. There are sectors where there are a lot of employers who are trying to hire in those areas that they’ve been trying really hard for the last 14 months — in warehousing, in delivery, in health care. In some of these other areas, people who work in food service, for example, there are so many fewer jobs than there were a year ago, the employers have a little bit more of the power there.

Ryssdal: Let me ask you now as an employer and a guy running your company, who’s spent a lot of time I’m sure thinking about the virtualness of our environment right now. How are you running your company? I read somewhere that you estimate 70% of your roles are going to stay virtual as we come out of this pandemic?

Hyams: Yeah, so we were a little bit early on this. March 3 of 2020, we made the call to send all 10,000 employees home, and what we found over the last year, actually, is that we’ve been incredibly effective as a business … I think it’s a lot like what we’re seeing from a hiring perspective. So one of the big things that we have done over the last year with our business is built out a platform for virtual hiring, and it turned out that video interviewing, which is something we’ve believed in for a long time, but thought was a lot farther into the future, we were able to bring that directly into our platform. And like with remote work, we think a lot of these people who are trying something like this for the first time are going to stick with it as the world opens back up again.

Hyams: So my belief is that we’re going to be able to better serve more people by having a range of options (in office, working from home and this hybrid environment) and that we’ll end up having more than one type of business culture and set of interactions that can open up because of that.

Hyams: You know, I have been really productive for the last 14 months. Our second night of working from home, we had an all-hands Zoom with all 10,000 employees, where I just did an open Q&A. We have done that now, every week since then. I actually feel more connected to the business as a whole sitting here in my home office than I did when I was trying to meet with people and connect with them office by office.

Ryssdal: How have those questions on those all-staff meetings changed from March 4 of 2020 to today?

Hyams: Well, I will say this: The first question that got the most votes, that was the first question we answered on that first night, was [about] the catering staff that cooks for us in our office — they’re not Indeed employees, they work for another business — how are we going to take care of them? And how are they going to do during this time? And that was really profound. People are now asking questions about, when can I get back to an office? Do I need to be vaccinated? And things like that, but they still care deeply about the people that we’re trying to help as a business, and that’s one thing that hasn’t changed.