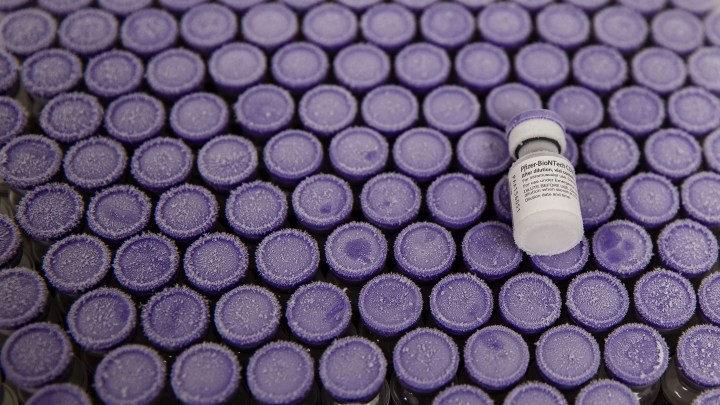 COPY
Right now, we don't have nearly enough vaccine supply for the world. A big reason for that is patents, said Amy Kapczynski, a law professor at Yale. Ariana Drehsler/AFP via Getty Images
Fast-Track Vaccines

Right now, we don't have nearly enough vaccine supply for the world. A big reason for that is patents, said Amy Kapczynski, a law professor at Yale. Ariana Drehsler/AFP via Getty Images
Listen Now

Members of the World Trade Organization are scheduled to meet Friday to discuss a proposal by India and South Africa to temporarily suspend patents on COVID-19 vaccines.

Backers of the plan say it would increase the supply of vaccines around the world by allowing more countries to produce them. There’s now enough supply in the U.S that any adult who wants a shot should be able to get one soon.

That reality is years away for most other countries. “We don’t have enough vaccines for the world, now or anytime in the near future,” said Amy Kapczynski, a law professor at Yale. One of the main reasons for that, she said, is vaccine patents.

“Patents are, essentially, government-granted monopolies,” Kapczynski said. “They allow you to prevent anybody else from making something that’s covered by your patent.”

That’s not a good idea in a pandemic, she added, “because we want all hands on deck. We want everybody who is able to make these vaccines in a high quality way to make them. And to help us put billions and billions more doses out in the next six months.”

Waiving patents alone wouldn’t necessarily make that happen, said Jacob Sherkow at the University of Illinois College of Law. “It presumes that if we just, like, write it down like it’s a recipe for chocolate chip cookies, we can just make vaccine tomorrow. And that’s simply not true,” Sherkow said.

I. Glenn Cohen at Harvard Law School said the U.S. government had some leverage when it was making deals with drug companies as part of Operation Warp Speed.

“One could have imagined a version of this where, as part of a condition of receiving the funding, there was more done to ensure access for less developed countries and sharing of technology and sharing of intellectual property,” Cohen said.

More than 100 countries have backed the proposal to temporarily waive COVID-19 vaccine patents. The U.S isn’t one of them, but the White House has said it’s considering the idea.