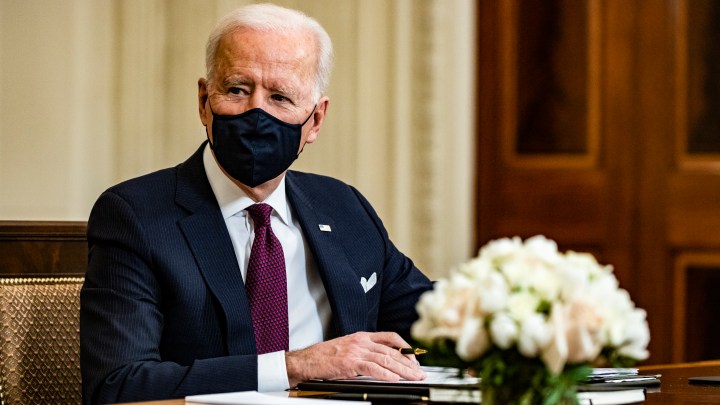 Consumers are feeling better. That’s essentially the takeaway from a number of consumer sentiment surveys we follow pretty closely here at Marketplace — given that about two-thirds of the economy is consumer spending and also that whether and how soon consumers return to pre-pandemic spending behavior will be crucial to getting the economy fully recovered from the pandemic.

The University of Michigan’s consumer survey shot up in March — more than 8% — to the highest level in a year, though it’s still about 7% below pre-pandemic levels.

The $1.9 trillion government rescue package, with $1,400 payments for all but high-earning Americans, plus another $1,400 for each kid, is helping to cheer folks up a good deal.

It’s been a week and a half since President Joe Biden signed the relief bill, also known as the American Rescue Plan. Payments started going out within days, and that’s been a big shot in the arm for consumers, said John Leer at Morning Consult, which polls Americans every day. “Consumer confidence is really on a tear. They are growing more confident at a faster rate than they have following the prior two stimulus packages.”

Leer said this time around the checks are bigger and they’re getting out faster.

Plus, the money’s targeted to low- and middle-income households, which are most likely to have lost work and be strapped for cash.

Now, rising confidence is likely to spark more consumer spending. But Lisa Rowan at Forbes Advisor said it’s not clear how much or how fast.

“What we’re seeing now is this really cautious optimism, where people say, ‘We can see signs that things are going to be getting better, but, uhh, we’re not quite ready to jump in headfirst,’” she said.

The latest survey by Forbes Advisor-Ipsos finds roughly half of Americans don’t believe it’s a good idea to reopen businesses 100% before the coronavirus is fully contained. And Morning Consult’s consumer surveys find that well over half of Americans still don’t feel comfortable traveling or going to a restaurant, shopping mall or sporting event.

Leer said more vaccination and continued coronavirus vigilance are crucial. “We’re sort of at this critical junction right now where we need to keep cases down for the next three months, let’s say, so that we’re able to unleash the full extent of our pent-up demand later in the summer.”

The money’s there, Leer said, from the latest relief checks and surging savings. Folks just aren’t feeling quite confident enough to spend it up — yet.