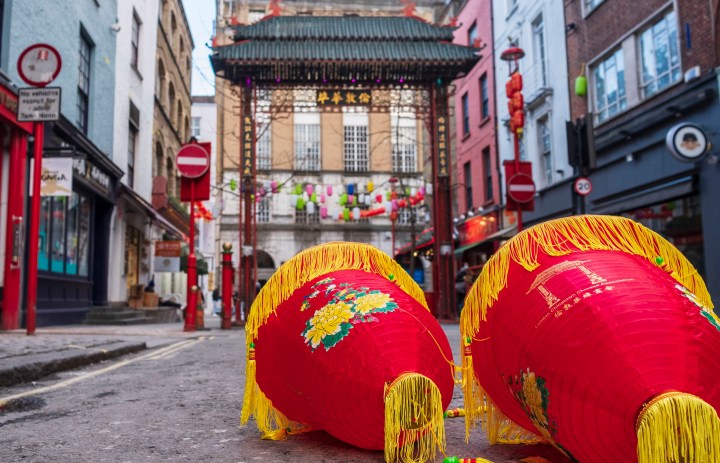 COPY
View of Chinese lanterns ready to hang up in London's Chinatown. May James/SOPA Images/LightRocket via Getty Images
COVID-19

View of Chinese lanterns ready to hang up in London's Chinatown. May James/SOPA Images/LightRocket via Getty Images
Listen Now

Millions of people in communities all over the world are celebrating the start of the Lunar New Year. This year, the festival ushers in the Year of the Ox.

Normally, it kicks off the world’s biggest annual domestic migration in China as people travel to celebrations with extended family. The coronavirus pandemic has changed all that, though. Data from China’s Transportation Ministry show a 70% drop-off in passenger trips in the last two weeks compared to two years ago.

But, with a year of changes to celebrations of all kinds, people have found new ways to mark these occasions.

In London, which usually hosts some of the biggest Lunar New Year celebrations outside Asia — boasting attendance of 700,000 people to the parade and festivities in Chinatown — people are turning to at-home celebrations instead.

Restaurants all across the capital and the country are offering meal kits complete with staples like roasted duck and pineapple tarts.

Mark House is the director of Lu Ban Kitchen in Liverpool, a restaurant home to an apprentice of one of China’s top master chefs.

On the global edition of “Marketplace Morning Report,” House told the BBC’s Victoria Craig about the surge in business he’s seen thanks to this year’s at-home meal kits.

Mark House: We have a cook-along box where we will include instructions and you provide all of the ingredients, and you cook it yourself. Or there is one where we’ve done all the work for you. We’ve cooked it all. You can just take it out, put it in the oven or on the pan, warm it up and then have a delicious Chinese meal.

Craig: And your boxes have gone all over the country, haven’t they? How many have you sold this year?

House: For this week, we sent out approximately 400 of the ones that you warm up. Some people have even used them to enjoy Valentine’s.

Craig: It’s not just the New Year’s kits, as you say. You also did a cook-along last night for New Year’s Eve. It was your biggest ever cook-along. How did that go?

House: It was awesome. It turns out it got a little bit larger than we hoped. We had 150 people on Zoom. But, actually, in terms of those that joined, it was actually over 300 [because many of them were couples], and it’s just great to show that number of people what authentic Chinese cuisine is all about me.

Craig: From my perspective, I feel like I have seen so many advertisements for different Chinese New Year kits that I can buy. Have you seen demand rise for the meal kits compared to the business that you’d otherwise be getting at your restaurant during this time of year in other years?

House: Yeah, we have a mission really is a restaurant to try and show people what authentic Chinese cuisine is all about. Our food is inspired from the region of Tianjin. The boxes that we send out, maybe as many as 1,000 people are sitting in their homes having a Chinese New Year. In our restaurant, we can normally hold about 100, 120 people on a really busy night. So, 1,000 people over a day is unbelievable.

Craig: Why do you think that is? Do you think people are just looking for a reason to celebrate? Maybe combining it with Valentine’s Day, as you say? What do you think the the biggest driver of that demand is?

House: A lot of it is boredom. But actually I think people are becoming more culturally aware or aware of other cultures, and they’re trying to learn some of those things.

Craig: Do you think this will be sort of a permanent addition to your repertoire once the restaurant reopens and life gets back to whatever normal is after the pandemic?

House: Absolutely. I think this has definitely shown us that the business will not only include a dining experience inside a restaurant, but actually a dining experience for inside people’s homes. I don’t think that’s something that’s going to go away.