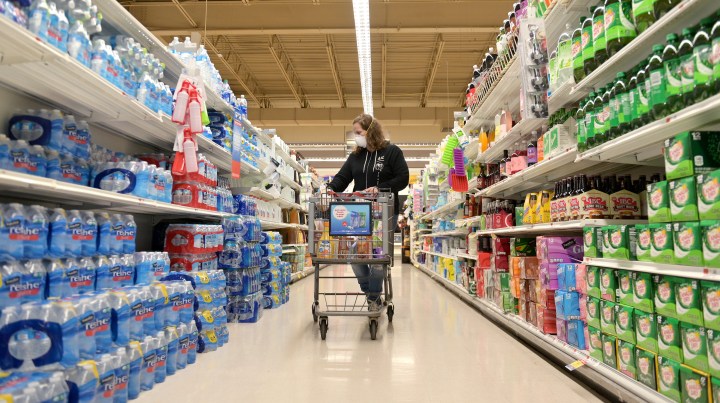 COPY
An Instacart shopper at work in a New Jersey market. Some occupations that grew during the pandemic may stick around afterward. Michael Loccisano/Getty Images
COVID & Unemployment

An Instacart shopper at work in a New Jersey market. Some occupations that grew during the pandemic may stick around afterward. Michael Loccisano/Getty Images
Listen Now

Federal Reserve Chair Jerome Powell spoke Wednesday about the recovery ahead, saying the U.S. is “a long way” from where it needs to be in terms of getting people back to work.

But coming out of the last recession, a lot of people ended up in low-wage, part-time and temp work.

An increase in temp work also seems to be what’s happening now, though in the pandemic job market, it’s looking a bit different from last time.

As the Great Recession faded, people did start to work again — but most new opportunities were in the service and hospitality industries. Many of those low-wage, no-benefit jobs were the first ones to go at the onset of the pandemic.

Future jobs will be based on the cultural shifts of the past 11 months, said Columbia Business School professor Laura Veldkamp.

“Lots more online shopping, lots more grocery pickup, lots less travel, for example. And some of those changes are likely to stick. And we may not go back to old habits after COVID passes,” she said.

That means some of those “old habits” jobs will be gone permanently.

“So, there’ll be some new jobs in those industries, but they’re going to look pretty different than the old ones. And they might require a somewhat different skill set,” he said.

But according to William Spriggs, an economics professor at Howard University, these jobs are still theoretical. Also, it took nearly a decade for the economy to recover from the last recession, and there wasn’t a pandemic then.

“There’s an intricate economic system built around that growth that took place, and we don’t have a real replacement for that,” Spriggs said.

He added that new job growth could start with more stimulus, a higher minimum wage and expanding service workers’ access to other industries.