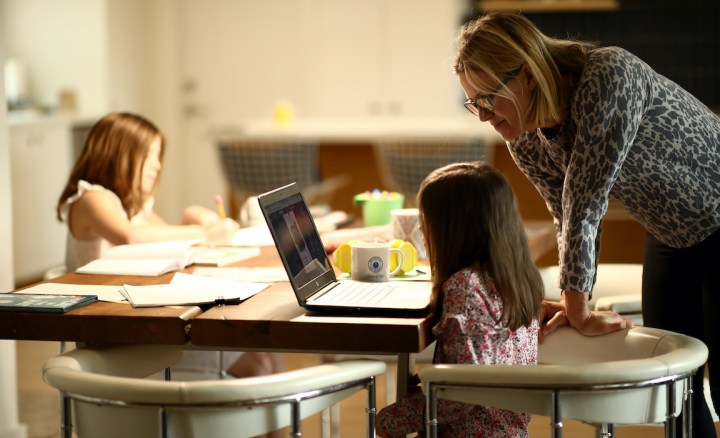 COPY
A new Gallup survey found that only 47% of parents whose kids are learning remotely are working full time, while 71% of parents who work full time have kids back in brick-and-mortar schools. Esra Shaw/Getty Images
COVID-19

A new Gallup survey found that only 47% of parents whose kids are learning remotely are working full time, while 71% of parents who work full time have kids back in brick-and-mortar schools. Esra Shaw/Getty Images
Listen Now

Over the past 10 months, more than 1 million parents, many of them women, have left the labor force because schools have gone to either full- or part-time remote learning.

But there are other parents who have scaled back.

A new Gallup survey found that only 47% of parents whose kids are in school remotely are working full time, while 71% of parents who work full time have kids back in brick-and-mortar schools.

What does this workforce divide means for those partially employed parents?

Before the pandemic, Lara Smith worked “really, really, really full time.” She regularly clocked 50- and 60-hour workweeks as a litigator in San Diego.

Then came March. So she went part time to help her 11-year-old son with his remote schooling.

Smith’s employer has been understanding, but according to Joan Williams, that’s not always the case. Williams runs the Center for WorkLife Law at the University of California Hastings College of the Law. She said switching to part-time work is often harder on women.

“Typically they pay through the teeth for it,” Williams said.

First, they’re earning lower wages, and second, they can face judgement about their priorities when they try to come back full time. But Beth Humberd, management professor at the University of Massachusetts Lowell, said the pandemic may do away with that.

“Folks that have a six- to nine- to 12-, 18-month break during this period on their resume, I don’t think are going to have to do as much explaining as before,” Humberd said.

Even so, some workers aren’t taking the risk.

Wendy Woodford in Rye, New York, has a third grader in hybrid school and doesn’t want to leave her part-time job as a financial analyst.

“I want to not lose that momentum I had,” Woodford said. “So as she gets older, I can start looking for another job with more hours. “

But when caretakers try to go back to full-time work, their earning power has sunk, according to Vasu Reddy with the National Partnership for Women & Families. This is “largely because a number of employers base their salaries that they offer on what you made in a prior job,” Reddy said.

And that can mean less retirement money later. Lara Smith in San Diego knows this. And she’s already dipped into the family nest egg.

“When this is done, there’s going to be some time rebuilding that for sure,” she said.

And that can only happen when she goes back to work full time.