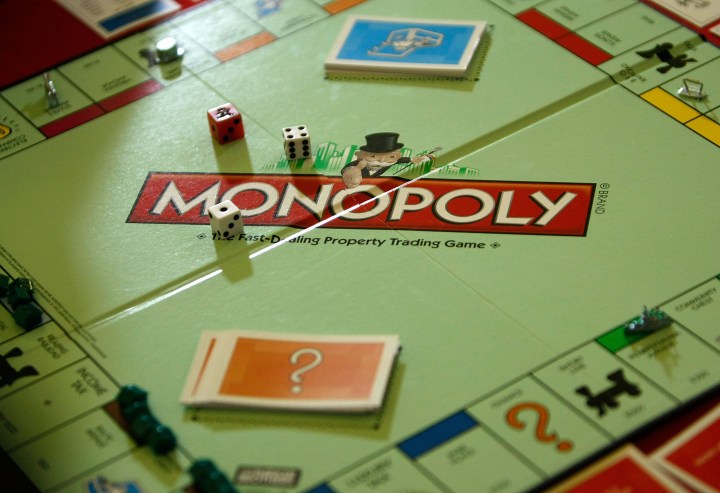 It turns out that having more money doesn’t necessarily make a person more inclined to share their money with others — in fact, research suggests the opposite is true.

One experiment by psychologists at the University of California, Irvine, invited pairs of strangers to play a rigged Monopoly game where a coin flip designated one player rich and one poor. The rich players received twice as much money as their opponent to begin with; as they played the game, they got to roll two dice instead of one and move around the board twice as fast as their opponent; when they passed “Go,” they collected $200 to their opponent’s $100.

“So one possibility is that rich players are kind of embarrassed by the situation, doing what they can to help out this other person who undeservedly is a poor player — and that’s actually the opposite of what we found,” said Paul Piff, the psychologist who conducted the experiment. (Piff is featured in “Capital in the 21st Century,” a film we’re watching as part of our Econ Extra Credit project).

In various ways — through body language and boasting about their wealth, by smacking their pieces loudly against the playing board and making light of their opponents’ misfortune — the rich players began to act as though they deserved the good fortune that was largely a result of their lucky roll of the dice.

At the end of the game, when researchers asked the rich players why they had won the game, not one person attributed it to luck.

Piff said the experiment reveals a fundamental bias that most humans share.

“When something good happens to you, we think about the things that we did that contributed to that success,” Piff said.

That can be a problem when it comes to inequality, which has skyrocketed in advanced economies in recent decades.

David Brancaccio: So here are these players, one of them doing well because of a flip of a coin, the other one not doing well. And what happens to the players doing better? It kind of goes to their head?

Paul Piff: Yeah. I think what was notable was that, within just a couple of minutes, dynamics start to crystallize. The rich players start to take up more space at the table, so they actually take on a more physically dominant posture. They start making more noise. They start banging the table louder with their pieces as they move around. And over the course of the 15 minutes, one of the things that we noticed is that they actually became ruder in their behavior.

So one possibility is that rich players are kind of embarrassed by the situation, doing what they can to help out this other person who undeservedly is a poor player — and that’s actually the opposite of what we found. The rich player became ruder; became less sensitive to the plight of the other player. They started eating more pretzels and did so in ruder fashion; we had a bowl of pretzels positioned on the table as another way of watching dominance in our rich players. They start showcasing their property, their wealth, sort of exhibiting how well they’re doing.

So across all these different indexes we found that rich players, despite winning the game through really very little effort — because of the coin flip that went their way — they still acted as if they deserved to win and that the poor player deserved to lose.

Brancaccio: They think it’s their own awesomeness. You gotta love human beings, don’t you? We’re just such great people.

And I think that this is a basic human bias that’s true of all of us: When something good happens to you, we — I think because of the cognitive machinery that we’re equipped with — think about the things that we did that contributed to that success. And we see that in people who win in all walks of life. When you’re winning, you think about the things that you did to help you win. The problem is, that bias writ large, at least in the domain of inequality, it can get people who are winning at the game of life — who have more money, who have more privilege, who have more power — to think about their resources as things that they deserve, to be less likely to think that inequality is a problem because after all, they deserve what they have, and as a result, to be less willing to do things about it, to be less willing to contribute to people who have less, to be less willing to behave in ways that are compassionate, that help the needs of those who have less than they do.

Brancaccio: And we can see why it’s such a challenge to deal with widening inequality that we see. But we’ve got to remember though that life isn’t completely a randomized game of Monopoly. Sometimes it’s because you did work harder and that’s why you’re making more.

Brancaccio: I was thinking maybe your test subjects in the Irvine, California, area were just especially entitled twits, but you’ve tested this elsewhere.

Piff: Yeah, so we ran a similar study in South Africa. We’ve run some versions of this in Europe. In different contexts that we’ve run this experiment, or versions of this experiment where people just become sort of randomly privileged or randomly disadvantaged, you find very similar differences where, if you have it play out, all of a sudden people that have benefited from a coin flip, start to think that they deserved to win.

Brancaccio: So your lab there works on really interesting things. I mean, you study this idea of inequality and altruism. Give us a taste of maybe something you’re working on now.

Piff: Yeah, so one of the things we’re really interested in is if it’s the case that inequality, in part, is perpetuated because of the biases that emerge from inequality in the first place, we’re really interested in what are the simple psychological levers that we could leverage to get people across the board to think about how life may not be fair, and how things can happen just like a global pandemic that can all of a sudden cause people, through no responsibility of their own, to experience distress and to experience for instance, even poverty or unemployment.

And how can getting people to think about these undeserved, unfair, potentially unjust world events or life outcomes get them to switch how they think about what happens to people — the circumstances that people’s lives take, and the things that happen to people ultimately — as not fair and not deserved, but things that may warrant individual, societal and even government intervention.

“Capital in the Twenty-First Century”EEC: Documentary Studies
Tags in this Story
Share this Story