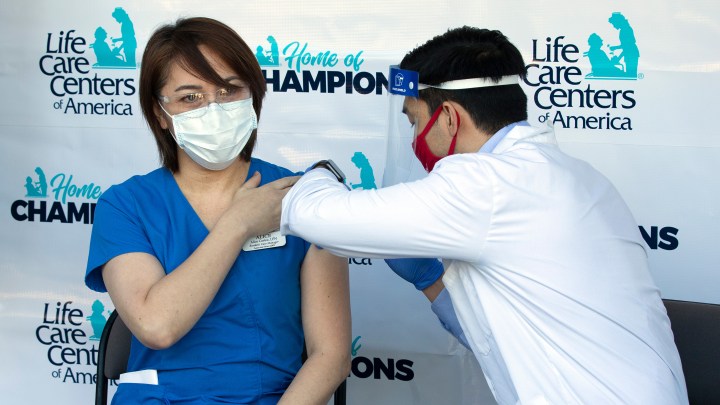 A CVS pharmacist administers a COVID-19 vaccine to a nurse at a senior living facility in Kirkland, Washington. Karen Ducey/Getty Images
Listen Now

Retail chains like CVS and Walgreens are administering the COVID-19 vaccine at long-term care facilities right now. But eventually the vaccine will also be available for the rest of us at retail pharmacies. Preparing for that is a huge logistical and staffing challenge.

The Food and Drug Administration has approved two vaccines so far. The Moderna vaccine can be stored in a regular freezer. But the Pfizer vaccine has to be kept at a temperature of minus 76 degrees Fahrenheit or colder. That requires a special ultra-cold freezer.

Retsef Levi at the Massachusetts Institute of Technology’s Sloan School of Management said that most pharmacies don’t have those.

“They are not very common, they are very expensive and it’s going to be unreasonable to expect that you can actually deploy them to all the stores,” Levi said.

Levi said that it is most likely that retailers will keep the Pfizer vaccines in those special freezers at central locations until they decide which stores to send them to and how many doses to send.

CVS told Marketplace that’s basically what it’s doing right now. In an email, corporate communications senior director Joe Goode said the company is “using a ‘hub-and-spoke’ model, where roughly 1,100 CVS Pharmacy locations store vaccines based on geographic need, and pharmacy teams will go to these locations to pick up the necessary doses.”

Once vials of the Pfizer vaccine are put into regular fridges at your local pharmacy, Levi said, “you have about five days to actually use it.” Retail chains, therefore, will have to predict how high demand will be at each store so they don’t end up wasting doses.

Another challenge: The vaccines that have been approved by the federal government require two shots, several weeks apart.

“How do you actually make sure everybody got two doses? Right? And how do you maintain a record of that?” Levi asked.

Those are important considerations, because customers may eventually need to prove they were fully vaccinated to board a plane or go to a concert or even go to work.

Retailers are also trying to hire tens of thousands of pharmacy workers to prepare for this moment. Robert Huckman at Harvard Business School said they’ll have to decide how to describe these jobs to their staff, including how long those new hires can expect to remain employed.

“Because once we get through this initial phase of vaccination, will there be stable employment for them within [the] organization?” Huckman asked.

He also said retailers will have to make space in their stores so people can line up safely while they wait to be vaccinated.

“Our retail footprints are very, very tight and stocked pretty heavily,” Huckman said. “So you could imagine, in a pharmacy, thinking about, where’s that space for someone to wait?”

On top of all that, there isn’t one clear set of rules that says who should be first in line for the vaccine. The CDC did give recommendations, but it left the final decisions — and the logistics — up to the states.

“The fact that it is now being worked out by 50 states and additional municipalities is causing unnecessary bureaucratic friction and slowness,” said Dan Mendelson, founder of the consulting firm Avalere Health.

Mendelson said that CVS, Walgreens and other retailers will have to keep track of all these rules, which makes the vaccine rollout even harder.