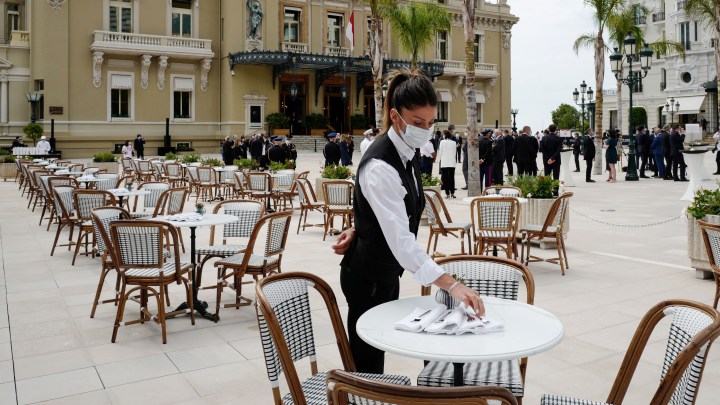 COPY
A waiter wearing a protective face mask sets a table on the terrace at the Cafe de Paris as restaurants and cafes reopen in Monaco in June. Valery Hache/AFP via Getty Images
COVID-19

A waiter wearing a protective face mask sets a table on the terrace at the Cafe de Paris as restaurants and cafes reopen in Monaco in June. Valery Hache/AFP via Getty Images
Listen Now

Monaco, the tiny independent principality on the French Riviera, has long attracted people wanting to escape from paying French taxes. It is now also attracting those who don’t want to abide by France’s stricter coronavirus restrictions.

Just across the border in France, all the restaurants are closed (though some are offering takeout). In Monaco, they are packed with people, many of them French people, like Marcel Guérin.

“We’re from Nice. We’ve come to eat in a restaurant because in France we’re not allowed to. It makes you feel like a teenager again, disobeying your parents!” he said in French.

Monaco resident Caroline Boulanger, who emerged from a restaurant a couple of doors down, said keeping restaurants open is helping the economy. The French should do the same, she said. “We have to get back to normal economically.”

France has many more restrictions on businesses than Monaco.

Still, there are quite a few anti-COVID-19 measures here.

“The tables have to be one and a half meters apart,” said Francis Poidevin, owner of the Quai des Artistes restaurant. “No more than six people per table. Reservations only. Customers must come no later than 2 p.m. for lunch and 8 at night when the curfew starts. We give them a permit so they can go home later, but everyone has to be out by 9:30,”  he said.

Poidevin said his restaurant business is doing nicely, up about 30% this holiday season over last year. And much of that, he said, is thanks to French patrons.