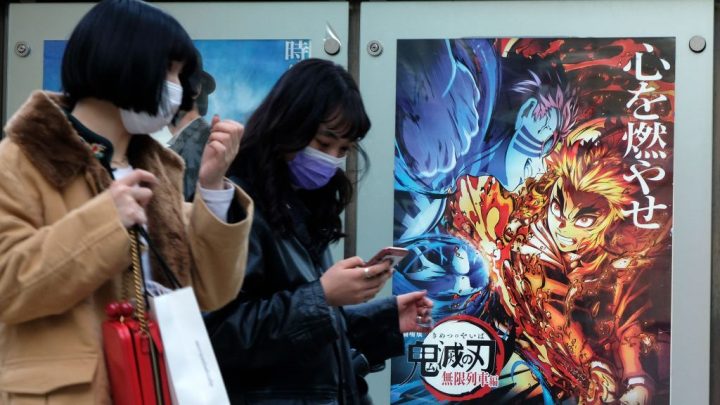 COPY
In Tokyo, pedestrians walk past a poster promoting "Demon Slayer the Movie: Mugen Train," which became the biggest box-office hit in Japan after its release this fall. Kazuhiro Nogi/AFP via Getty Images

In Tokyo, pedestrians walk past a poster promoting "Demon Slayer the Movie: Mugen Train," which became the biggest box-office hit in Japan after its release this fall. Kazuhiro Nogi/AFP via Getty Images
Listen Now

Despite the pandemic, anime fans turned out in droves for the theatrical premiere of “Demon Slayer the Movie: Mugen Train,” a film based on the incredibly popular Japanese animated series and manga. The movie became the biggest box-office hit in Japan ever, at time when the global theater industry is struggling to survive.

It’s fair to say that 2020 may not have been a terrible year for the anime industry.

Kimberly Adams: So why is anime having a global moment right now? I know it’s not just me.

Lynzee Loveridge: Oh, no. Anime has been having a moment for the last couple years, but I think it’s especially increased during the pandemic. People have been inside and looking through their queue, and maybe they’ve watched all their episodes of “[The] Great British Bake Off,” and they want to move on to something else. So anime is a global phenomenon, I would say it’s definitely exploded. And there’s a little bit of something for everybody, no matter what your tastes are.

Adams: Yeah, you’ve got sort of the action, you’ve got the fantasy, or the genre that they call slice of life, with just sort of snapshots of how people live their every day. And there’s just a huge backlog of content for people who are running out of things to watch.

Loveridge: Oh, definitely. We get about 30 to 40 new shows out of Japan every three months. So in a year, you’re getting 150 different shows to pick from.

Adams: Talk to me about the business landscape for anime and how that is changing since it is rising in global popularity.

Loveridge: Anime has definitely made some major investment changes over time, as far as who’s become interested in it. And we’ve seen streaming services get very deeply involved in the production of anime, as far as getting series made just for Netflix, or just for Crunchyroll, or just for Funimation. They’re putting the money forward to get on those production committees and make some of the decisions about what gets adapted, based on what they think will be popular.

Adams: Do you have any sense of how this global popularity of anime is playing out among fans in Japan?

Loveridge: All I can say about that is that whenever I talk to creators, directors, character designers, producers, they’re always happy to see that there is an international response to their art. And even though it’s made in Japan, that’s not limiting its appeal to kids in Europe or South America. There’s huge fandoms for shows that didn’t really take off in the U.S. So there ends up being different touchstone series in different countries all over. And I think that’s great.

Adams: What was the first anime show that you watched? And that got you into it?

Loveridge: The first one that got me into it, like hooked was “Sailor Moon.” And that’s around the when we got access to the internet in my house, and there was all these fan websites. There’s a whole culture like a social culture. And for me, I was someone who, you know, I had a hard time making friends and meeting people with similar interests. But that was all online, and I could have this online life with with friends who had that interest.

Adams: The big one for me was “InuYasha” on Cartoon Network.

Loveridge: That was really good. And that one still has a lot of a lot of fans. It actually got a new spinoff this year. It’s a whole new entry point for fans.

Adams: Yeah. And I imagine from a business perspective, a reason to sort of relicense the back catalog.

Loveridge: Oh, yeah, for sure.

Adams As somebody who’s been into anime for a really long time, you know, you talked about sort of feeling a little bit lonely in that space when you were younger. What’s it like, sort of seeing it go mainstream?

Loveridge: I think it’s wonderful. Anime, to me, was kind of eye-opening. It started as just cartoons I liked to watch and characters that I felt a sense of connection with, but it also opened me up to other cultures. And you get curious about that. And that curiosity, I think, is wonderful. Everyone should have a curiosity for things outside of their immediate circle, however they happen to get that.