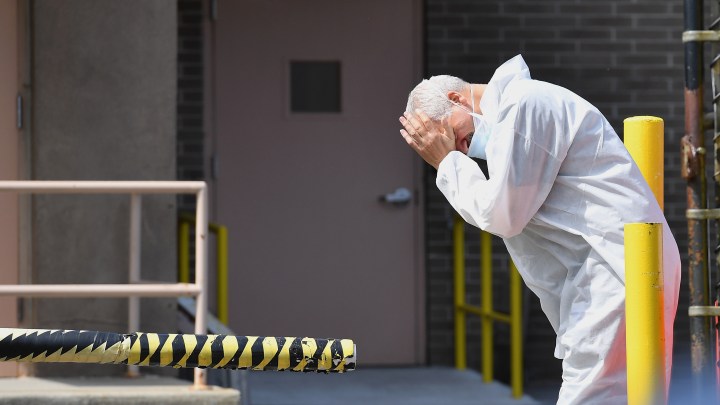 COPY
“It feels like the water I was swimming in has turned into molasses,” said one doctor of working during the pandemic. Angela Weiss/AFP via Getty Images
COVID-19

“It feels like the water I was swimming in has turned into molasses,” said one doctor of working during the pandemic. Angela Weiss/AFP via Getty Images
Listen Now

Even before this year, Dr. Ted Mazer was feeling burned out from the business side of running his ear, nose and throat practice, and the stress of dealing with insurance companies.

Then came the pandemic.

“COVID definitely accelerated what I would call my ultimate burnout,” said Mazer, 62. “The financial strains of dealing with COVID, with a dramatic drop in practice volume, with the loss of surgeries during the initial outbreak, patients not wanting to come in.”

It was a struggle. In the spring, patient volume at his otolaryngology practice near San Diego, California, dropped 75%.

“It’s a surgical specialty. It’s also a specialty that looks into dark orifices, like noses and ears and deep down throats,” Mazer said. “Very much not good for telehealth.”

He did some telehealth, but business never really came back. Months into the pandemic, patient volume was still down 40% or 50%.

“You could see the writing on the wall,” Mazer said. “I finally decided that we couldn’t continue to do what we were doing with a very opaque future for what would happen if we even tried to make it to the end of the year.”

In September, after two potential buyers fell through, Mazer closed his practice and retired from medicine, earlier than he had planned.

Eight percent of U.S. doctors have closed their practices because of COVID-19, according to a survey from the nonprofit Physicians Foundation. That translates to roughly 16,000 fewer practices nationwide. Another survey, from Medscape, found that a quarter of doctors are considering retiring early.

For Dr. Monique Child, the pandemic has made everything about being a doctor feel harder and slower, more draining and exhausting.

“It feels like the water I was swimming in has turned into molasses,” said Child, 46, who runs a one-woman practice, Polar Pediatrics, in Anchorage, Alaska.

“After 20 years in the field, I feel like with most questions that a new parent might have, I have answers. And in this case, I have a lack of answers, and even basic answers. Like, how long is this going to last? Can I get it again?”

On top of that, she said, there are also “all the normal hassles of a broken health care system, which have become more than can be managed in the midst of a pandemic. It’s demoralizing.”

Right now, Child can’t see herself leaving her patients in the middle of the pandemic. But once enough of the country has been vaccinated and the threat of the virus has receded, she is planning to take some time off.

“And maybe take some of that time to think about, do I want to go find a different career?” she said. “Or is there enough in the bank that I can retire early? And by that, I mean, maybe before I’m even 50.”

Those are possibilities she had never considered, and thinks she probably never would have considered, if it weren’t for the pandemic. Before, she always figured she would work until she was 65, or older.

“You know when you take the keys away from Grandma and Grandpa? A few years before you do that, you should also take away their ability to practice medicine,” she said. “I thought I could see myself going all the way till the end.”

If too many doctors hit that point and decide to leave medicine, that could have major implications for patients and the health care system as a whole, according to Valenti, the Texas gynecologist.

“We cannot turn out doctors quickly,” he said. “It’s not something we can just crank up the assembly line for. Not only do we have a projected shortage of doctors, but we don’t have enough residency slots to train them, even if you graduated them from medical school.”