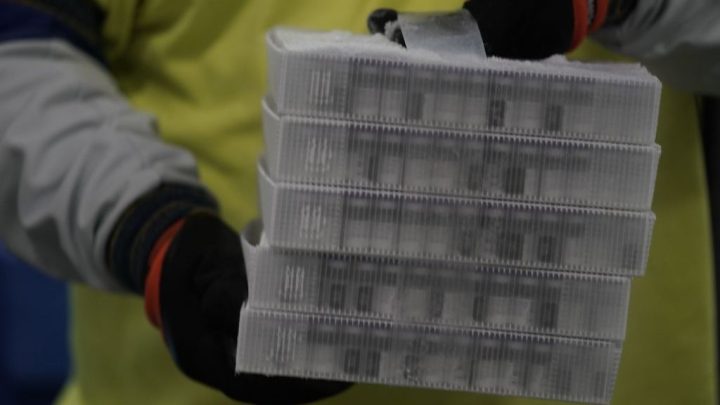 COPY
Vials in boxes containing the Pfizer-BioNTech COVID-19 vaccine are prepared to be shipped at the Pfizer Global Supply Kalamazoo manufacturing plant in Kalamazoo, Mich., on Dec. 13, 2020. Morry Gash/AFP via Getty Images
COVID-19

Vials in boxes containing the Pfizer-BioNTech COVID-19 vaccine are prepared to be shipped at the Pfizer Global Supply Kalamazoo manufacturing plant in Kalamazoo, Mich., on Dec. 13, 2020. Morry Gash/AFP via Getty Images
Listen Now

That’s a dataset, developed by the Centers for Disease Control, that tracks how disasters affect disadvantaged communities. States can also use the index to decide how vaccines should be allocated.

The Social Vulnerability Index uses Census data to weigh factors like a community’s poverty level, its racial breakdown or whether people live in crowded housing.

“These factors are increasingly important in our understanding of who gets harmed by disasters, who doesn’t,” said Jeff Schlegelmilch, who runs the National Center for Disaster Preparedness at Columbia University.

In the past, the index has been used after wildfires and hurricanes. Now it can help states identify communities that have been disproportionately hit by COVID-19.

“And so those are the populations that we have to make sure get the vaccine before other people, for whom COVID is an inconvenience but not an existential threat,” said Harald Schmidt, medical ethics professor at the University of Pennsylvania.

“Because it’s no good to prioritize worse-off populations if they won’t use them,” said Schmidt, adding that a number of states have already published plans to use the CDC’s index.