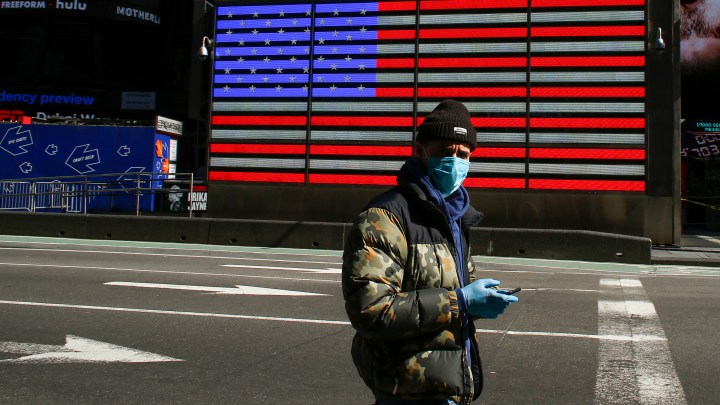 COPY
This year, the U.S. has added instability to the global economy, in contrast to its historical role of bolstering recovery. Kena Betancur/AFP via Getty Images
COVID-19

This year, the U.S. has added instability to the global economy, in contrast to its historical role of bolstering recovery. Kena Betancur/AFP via Getty Images
Listen Now

This week, on Tuesday and Wednesday, the Federal Reserve’s Open Market Committee meets for the last time this year, and the last time during Donald Trump’s presidency.

It’s tough to try to set interest rates, stimulate growth and protect the fragile recovery in the middle of a pandemic surge — with no relief bill in sight.

The thing is, the U.S. is not alone: Recovery’s going to be tough in a lot of places, even as COVID-19 vaccines start to roll out.

In addition to the Fed, this week central banks in the U.K., China, Japan and a host of other countries are also meeting. In some of those economies, the recovery is going better than it is here.

A global economy is usually a multifaceted thing. But in the pandemic, a single unifying principle applies, said Cornell economist Eswar Prasad.

“Countries that have done a better job at managing the virus do seem to be doing better in terms of economic recoveries,” Prasad said.

The evidence: much of Asia. China, for example, says it’s largely banished the coronavirus.

“China’s recovery seems to be well-entrenched, and it’s now in the position of being by far the leading contributor to what little global growth there is likely to be this year,” Prasad said.

Contrast that with India and Russia, where there’s more COVID and less recovery.

That’s a lot like the U.S., said Adam Posen at the Peterson Institute for International Economics.

“The drag on the U.S. economy is really provoked by the disease,” Posen said. And the lack of new relief spending.

In Europe, overall, fiscal and public health policies have been more effective. The cloud on the horizon, said Columbia Law professor Anu Bradford, is that the U.K. might crash out of the European Union without a deal by year’s end.

“The economic consequences of a ‘no deal’ are devastating,” Bradford said. “They are very bad for the EU, but even more so for the U.K.”

The U.S. has historically been a net contributor to global recovery after economic crises. But Posen at the Peterson Institute said mostly what the U.S. is contributing this time around is instability.