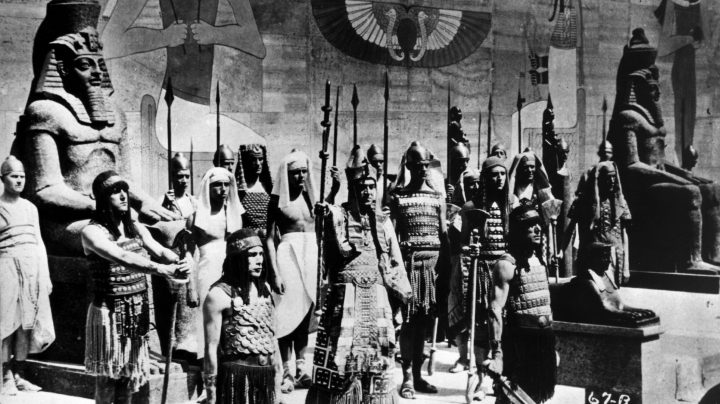 COPY
A scene from the 1923 film "The Ten Commandments," one of the films that helped establish Southern California as the center of the film industry in the years following the pandemic of 1918. Topical Press Agency/Getty Images

A scene from the 1923 film "The Ten Commandments," one of the films that helped establish Southern California as the center of the film industry in the years following the pandemic of 1918. Topical Press Agency/Getty Images
Listen Now

Warner Bros. Pictures announced that “Wonder Woman 1984,” one of the last big blockbusters left on the 2020 release schedule, will be available on HBO Max on Dec. 25, the same day it goes into theaters. But lackluster box office results for Christopher Nolan’s “Tenet,” delayed releases of major films, and continued theater closures in some of the biggest movie markets in the country due to the coronavirus pandemic have raised questions about the future of Hollywood.

Gianluca Sergi, a professor of film and television at the University of Nottingham wrote recently for “The Conversation” about how Los Angeles became the center of the film industry in part because of opportunities created by the last pandemic– the Spanish influenza pandemic of 1918.

“The Spanish flu ushered in the century of Hollywood, in many ways” Sergi told Marketplace. “We may be witnessing the exact opposite– the reserve process right now.”

Prior to World War I, the film industry was more developed in Europe than in the United States. “Then the war arrived, and as you can imagine, particularly in Europe, that brought devastation on a grand scale,” said Sergi. “The war effectively stopped development in Europe … and then the pandemic killed it off altogether.”

“In the U.S. on the other hand, which of course had seen no combat on U.S. ground, infrastructure was being built at a growing pace,” said Sergi. “It was, however, also a time when two cities– it wasn’t [just] Los Angeles, it was New York and Los Angeles that were kind of battling it out to see who would come on top.”

Los Angeles reacted quickly to the pandemic of 1918 which meant that it suffered less losses than other cities. “Los Angeles certainly looked more appealing than being stuck in New York during that particular pandemic,” said Sergi.

In the years following the pandemic of 1918, major films such as the “Ten Commandments,” and “The Four Horsemen of the Apocalypse,” helped establish Southern California as the center of the industry.

Though Sergi said the hesitancy of Hollywood’s studios to release big movies like the new James Bond film “No Time to Die,” Marvel’s “Black Widow,” and “Top Gun: Maverick” during the coronavirus pandemic is understandable, it could open up the door for the international film industry.

“Hollywood beware,” he said. “Because by the time studios begin to release movies again, they may find that the situation has changed dramatically. It changed very quickly during the previous pandemic, so there’s no reason to believe that it couldn’t change just as fast this time around.”