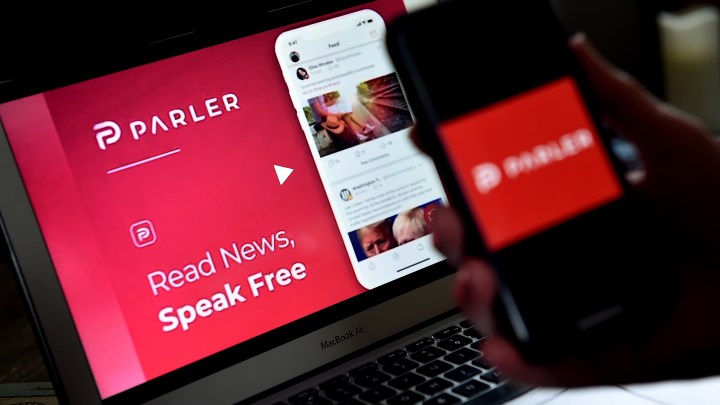 COPY
In the past week, the number of people using Parler has rocketed to more than 8 million. Olivier Douliery/AFP via Getty Images

In the past week, the number of people using Parler has rocketed to more than 8 million. Olivier Douliery/AFP via Getty Images
Listen Now

The No. 1 app for much of the past week, for both Android and iPhone users, was the social media platform Parler. It appeals mainly to conservatives, who say that Twitter and Facebook are censoring right-of-center views. Parler adherents include Texas Sen. Ted Cruz, a Republican, as well as celebrities Kirstie Alley and Scott Baio.

Parler has confirmed reporting from over the weekend indicating the app is supported financially by Republican megadonor Rebekah Mercer, who has also bankrolled GOP political action committees and think tanks.

Right now, the Parler app features hit postings on “fake news,” errant voting machines and a “coup” against President Donald Trump. In the past week, its users rocketed to more than 8 million.

Libby Hemphill, professor of information at the University of Michigan, said funding from Mercer can insulate Parler from critics in the social media market.

“They don’t have to be as responsive, necessarily, if they have somebody who is willing to pay for them to weather challenges from advertisers,” Hemphill said. “Or critiques from the media, or critiques from users.”

Parler also plans to earn revenue by having social media stars market products under a model known as influencer marketing.

“People can advertise with influencers specifically and those influencers’ brands, rather than our brand as a company as a whole,” Parler founder and CEO John Matze said in a July 2 interview with CNBC.

Influencer marketing differs from marketing on Twitter or Facebook, where companies pay to run ads on users’ feeds. On Parler, brands pay influencers to do the talking.

“You’re basically paying this platform to link you up with someone else, who will make it look almost organic, that they are parlaying or that they are promoting your product,” said Max Rymer, co-founder and president of the digital marketing firm Nativ3.

Rymer said this concept remains in the early beta stage at Parler.

One issue for influencers is that joining a perceived ideological site like Parler could turn off some online fans.

“If you’re an influencer who chooses to establish a presence there, you are associating yourself with what it stands for,” said Brian Wieser, global president at the media investment firm GroupM. “That may not be desirable for a lot of influencers, if not the majority of influencers.”

Going forward, Hemphill at the University of Michigan is watching for whether Parler users organize big events or host unique conversations.

If not, she thinks users may go back the social media sites they came from.

“Most of us come back, whether after a short break or a longer one for the network effects,” she said.