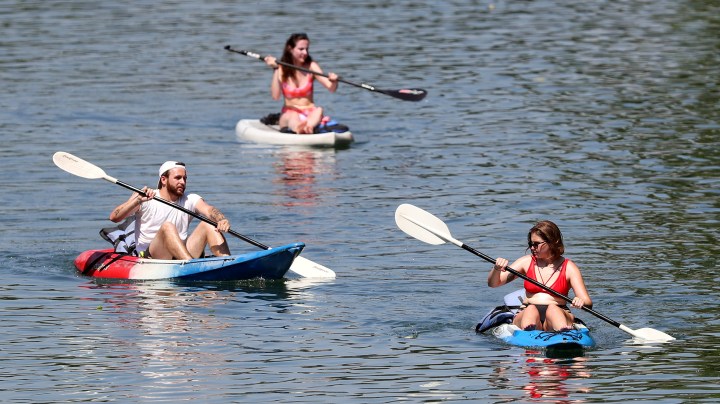 COPY
Kayakers paddle their way along Barton Creek in Austin, Texas, in May. The outdoor economy made up just over 2% of GDP in 2019. Tom Pennington/Getty Images
COVID-19

Kayakers paddle their way along Barton Creek in Austin, Texas, in May. The outdoor economy made up just over 2% of GDP in 2019. Tom Pennington/Getty Images
Listen Now

Dale Davis has never seen as many people riding bicycles as he has during the pandemic.

A lot of them are riding bikes they bought at his shop, 505 Cycles. As soon as COVID-19 hit, overnight, sales went through the roof.

“It was one of the craziest things I’ve ever seen,” he said. “When it happened, I thought it would be short lived, but it wasn’t. It just hasn’t stopped.”

Everyone wanted a bike — and not just in Farmington. Across the country, businesses that sell all kinds of outdoor gear, from bikes to kayaks to paddleboards to hiking gear, have been doing well during the pandemic.

“The demand for getting outside, whether it is in a neighborhood park or a national park, has been huge,” said Lise Aangeenbrug, executive director of the Outdoor Industry Association. “It’s one of the few things you can do socially distanced.”

The outdoor recreation economy — which includes hiking and biking, hunting, RVs, outdoor festivals and more — is sizable in the United States. In 2019, it made up just over 2% of the country’s gross domestic product, according to the Bureau of Economic Analysis.

“That puts it about at the same size as the broadcasting and telecommunications sector,” said Dirk van Duym, a research economist at BEA. “And it’s significantly bigger than mining.”

It’s also grown every year since 2017, when the BEA first started to track its impact on the economy.

But even though the pandemic has pushed many people outside in search of safe, socially distanced adventure, the outdoor recreation economy has been hit hard, particularly those businesses that rely on bringing groups of people together.

In New Mexico, where the outdoor recreation economy has been growing particularly fast, more than 90% of businesses have lost revenue during the pandemic, according to Axie Navas, director of the state’s Outdoor Recreation Division.

“Fly fishing outfitters, hunting outfitters, guides, people who are getting people up into the most beautiful areas of New Mexico, working as they are in a segment of the outdoor industry that is hospitality focused, it’s been really hard for them,” she said.

Navas is optimistic, though, that the outdoor economy will not only bounce back but continue to grow in the coming months and years.

“We know that the outdoor industry is a powerful force in the state,” she said. “And it has the potential to continue to help us diversify the economy.”

While 2020 may not end up being another year of growth for the outdoor recreation economy, Aangeenbrug of the Outdoor Industry Association expects that ultimately, there will be an unexpected silver lining to the pandemic.

“Because more people are getting outside, I think they’re recognizing the health and wellness benefits, particularly for your mental health,” she said.

Long term, she expects that will end up bringing more business to the outdoor economy.