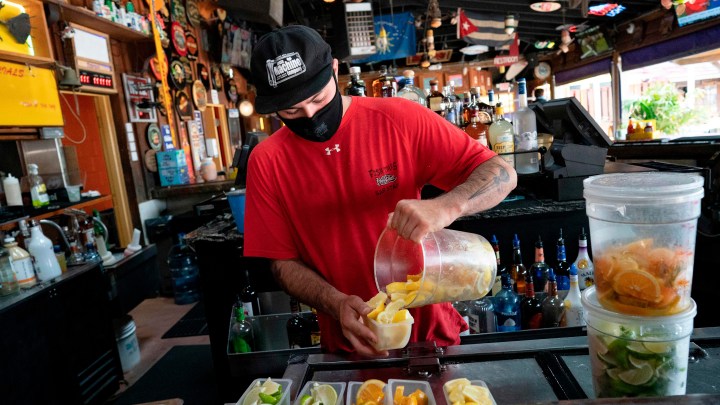 COPY
A bartender prepares to open his bar in Ocean City, Maryland, amid the pandemic, May 29, 2020. Alex Edelman/AFP via Getty Images
COVID-19

A bartender prepares to open his bar in Ocean City, Maryland, amid the pandemic, May 29, 2020. Alex Edelman/AFP via Getty Images
Listen Now

The Federal Reserve is making some changes to its Main Street Lending Program, which is supposed to be for small and midsized businesses.

It hasn’t been nearly as popular as the Paycheck Protection Program — the Fed has only made around 400 loans so far. Now, it says it’s lowering the minimum amount businesses can borrow to $100,000.

“We can definitely find places to use the money,” said Ashwin Deshmukh, owner of the Manhattan cocktail bar Short Stories. He said he’s in the process of applying for a Main Street loan.

Unlike his Paycheck Protection Program loan, this one would not be forgivable, and it would have to be paid back in five years.

“It gives us a little pause to take on something we have to pay back on like a five-year basis, when most businesses don’t know if they’re going to be around in five months, let alone five years,” Deshmukh said.

The loan’s interest rates are north of 3%.

Matt Hetrick runs the accounting firm Harmony Group. “You’re talking about loans that have terms that are very, very similar to loans that you’d get from banks, say, before the pandemic.”

There are some businesses that could benefit from the Fed’s program, said John Lanza at the accounting and advisory firm CohnReznick, like bigger businesses with a few hundred employees and businesses that had plans to expand before the pandemic.

But that brings us back to the issue of business confidence. Hetrick said in today’s environment, “there can’t be a lot of businesses out there, especially in the small business community, that are sitting there saying, ‘Hey, I feel a lot better about what I can see four years from now; I’m going to be great.'”

Two bankers who deal with many small businesses told me they just don’t see any point in their clients hitting up the Main Street Lending Program.