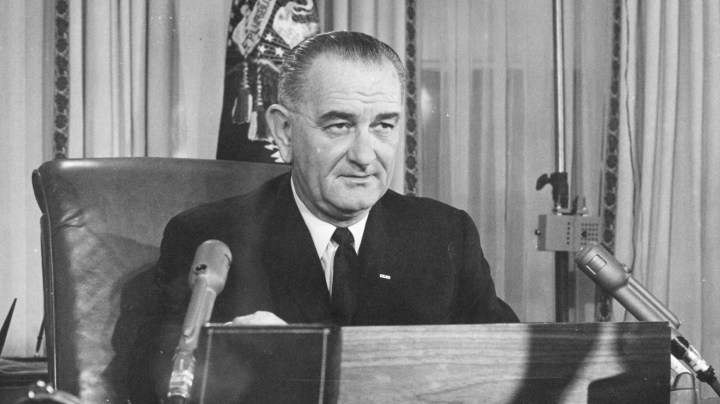 COPY
President Lyndon B. Johnson wanted to fire Fed Chair William McChesney Martin Jr. for hiking interest rates. But presidents can't do that, so Johnson gave him a tongue lashing instead and shoved him against a wall. Keystone/Getty Images

President Lyndon B. Johnson wanted to fire Fed Chair William McChesney Martin Jr. for hiking interest rates. But presidents can't do that, so Johnson gave him a tongue lashing instead and shoved him against a wall. Keystone/Getty Images
Listen Now

History does repeat itself. Sometimes, almost word for word. Consider President Lyndon B. Johnson. Like President Donald Trump, he put tremendous pressure on the Federal Reserve to keep interest rates low and juice the economy before voters went to the polls in 1968.

Johnson and the Fed chair during his administration, William McChesney Martin Jr., couldn’t have been more different. Johnson was a larger-than-life Texan known for back-slapping and arm-twisting to get his way. Martin was an intellectual, bespectacled banker. Initially, though, they got along.

Martin sent a supportive letter to Johnson after John F. Kennedy was shot and Johnson became president. Johnson called Martin to thank him, trying his best to be charming.

“Well, you just assume you’re starting out with someone who doesn’t know much about your shop,” Johnson told Martin in a recording of their call. “And then you start to tell me what I ought to know about it.”

Johnson’s charm offensive continued, even after the Fed raised rates in 1964 just weeks after Johnson won the presidential election. In another phone call, Martin explained why the rate hike was necessary and reassured the president about the money supply. Johnson seemed satisfied.

“That’s wonderful, Bill,” Johnson said. “I hope you’ll watch that and do everything you can. I’d hate for this to turn the other way on us.”

But Johnson didn’t want any more interest rate hikes. Sarah Binder, a political science professor at George Washington University, said the president didn’t want to own up to the cost of the Vietnam War and the war on poverty. Low interest rates kept the cost of government borrowing down.

“The worst would be high rates, making plain to everyone the cost of what the government was doing both domestically and abroad,” Binder explained.

But Martin was worried the economy would overheat, then crash. He wanted to cool things down, slowing spending by raising rates again and making it harder for businesses and consumers to borrow money to spend. In 1965, Martin went public, saying there were “disquieting similarities” between the economy of the 1960s and the Roaring ’20s leading up to the Great Depression. Later that year, Martin cast the deciding vote in a Fed decision to raise interest rates again. Johnson was livid. He wanted to fire Martin, at one point telling his treasury secretary, Henry Fowler, in another recorded phone call to find a replacement.

“Henry, you all got to think of … where we can get a real articulate, able, tough guy that can take this Federal Reserve place,” Johnson said.

But Johnson was told a Fed chair can’t be fired just because he disagrees with the president. So instead, Johnson called Martin down to his Texas ranch. Johnson drove his Lincoln Continental convertible to the airport and gave Martin a lift to the ranch. But the charm offensive ended when they got there, and Johnson let loose on Martin.

The tongue lashing wasn’t recorded, so Binder paraphrased: “My boys are dying in Vietnam, and you won’t print the money I need.”

Gary Richardson, a professor of economics at the University of California, Irvine, and Fed historian, said the almost 6-foot-4 Johnson even shoved the much shorter Martin up against the wall.

He described the confrontation this way: “These grown men going at it. Johnson shouting, bullying, pushing, kind of physically manhandling the chairman of the Federal Reserve.”

Richardson said Martin was shaken but stood his ground. Later, Martin suspected that Johnson wasn’t being honest about the true cost of the Vietnam War. Brigid Callahan Harrison, a professor of political science and law at Montclair State University, said Martin worried again that the economy would overheat with all of the spending by the government and consumers with money borrowed at interest rates that are still pretty low.

“He says this great line: the key function of the Federal Reserve is to take away the punch bowl just as the party is getting good,” Callahan Harrison said.

But, maybe not wanting to be Johnson’s punching bag again, Martin held his fire on interest rate increases for a couple of years. Then, in March of 1968, Johnson announced he’s not running for reelection. In the two months after that, the Fed raised interest rates by almost 1%.