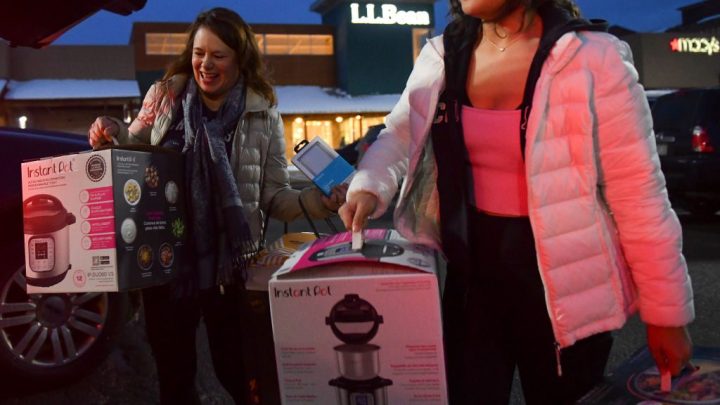 Black Friday is a family tradition for Cassie Lawrence. She used to go in high school with her parents. They would show up at 4 a.m., bust down some doors and score some deals.

“The rush of everything was really fun,” Lawrence said. “It’s kind of a free for all, where you look at something, you see it’s a good deal, you see it’s in your size, there’s no time to try anything on,  you just throw it in your basket and go.”

Not this year, though. Lawrence doesn’t want to risk getting COVID — especially because she’s pregnant and due just before Thanksgiving.

“So I’ll probably be doing my shopping online and won’t be headed to the stores,” she said.

The CDC recently put out a list of low-, medium- and high-risk activities for the fall holidays. On the high-risk list? Shopping in crowded stores on Thanksgiving or the day after, Black Friday.

“Aggregating hundreds of people in the cold dark, outside of a store, waiting for the doors to open and then all rushing in and fighting over a limited supply of merchandise — even as a non-epidemiologist, that strikes me as a pretty bad idea,” said Joel Bines, a managing director at Alix Partners.

And so far, retailers have been signaling that this is not the kind of Black Friday they’re planning this year.  Major retailers like Target, Walmart, Kohl’s and Best Buy have decided to close on Thanksgiving this year.

They are trying to encourage people to shop earlier by offering Black Friday deals in October and November, accelerating a trend from recent years. They’re also trying to push people to shop online.

And “a lot of them are touting their curbside pickup as an option, really trying to do everything that they can to, to avoid that, you know, one-day crush,” said Casey Runyan, managing editor at the website Brad’s Deals.

Even so, it is possible that some diehard Black Friday enthusiasts will still show up this year.

“I would equate it to the diehard Chicago Cubs fans who are renting, you know, balconies across from the stadium because they’ve been to, you know, one Cubs game a year for 72 years and want to keep the streak alive,” Bines said. “There will be some of that. There will surely be some localized overcrowding.”

But he thinks most people will get the message: This Black Friday, shop online. And if you do come to the store, it’s best if you pick up your stuff at the curb.