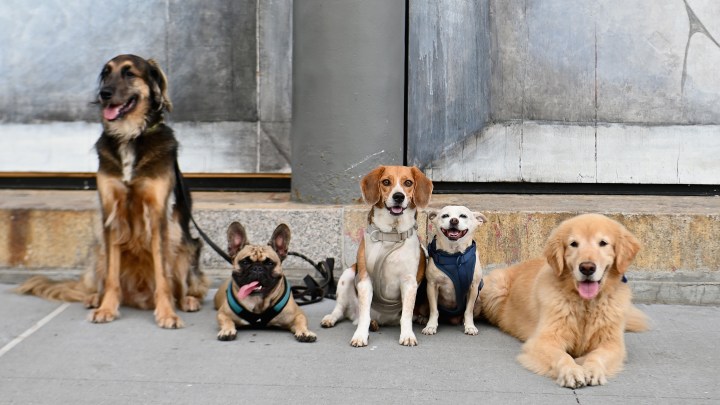 COPY
They have something to say. Angela Weiss/AFP via Getty Images

They have something to say. Angela Weiss/AFP via Getty Images
Listen Now

Christina Hunger is a speech-language pathologist who works with kids. She helps them find other ways of communicating besides talking. One way she does that is by using buttons. They’re marked with pictures or labels, and kids can push them to say what they want.

Hunger decided to build one for her dog, Stella, to see if it could help them communicate better. She started posting videos of her dog pressing the buttons on YouTube.

Leo Trottier saw those videos. He has a background in cognitive science and artificial intelligence, and he’s spent years looking at how dogs think. He set up a company called CleverPet in 2014 and built a gaming system that rewards dogs with treats if they press buttons in a certain order. So after he saw saw Hunger’s videos, he was “blown away.”

“I was like, this is gonna change everything,” Trottier said.

He decided to make his own board using her techniques, designed specifically for dogs, called FluentPet. Trottier wouldn’t say exactly how many have been sold, but he did say “tens of thousands.” A version with two buttons sells for $29.40, and one with 32 buttons sells for just under $200.

Hunger isn’t affiliated with the company, but she said she supports what it is doing.

“We’re really just scratching the surface of what is possible,” she said.

There are other technologies emerging that aim to enhance human communication with animals.

FluentPet’s website says, “Let’s teach them to talk.” But Alexandra Horowitz, who heads the Dog Cognition Lab at Barnard College, said that when a dog uses the buttons, they’re “not using words in the way that humans use words.” She said that animals are “communicating all over the place. And we can gloss those communications with human words.”

Still, Horowitz said it’s good that more people are becoming interested in communicating with their dogs.