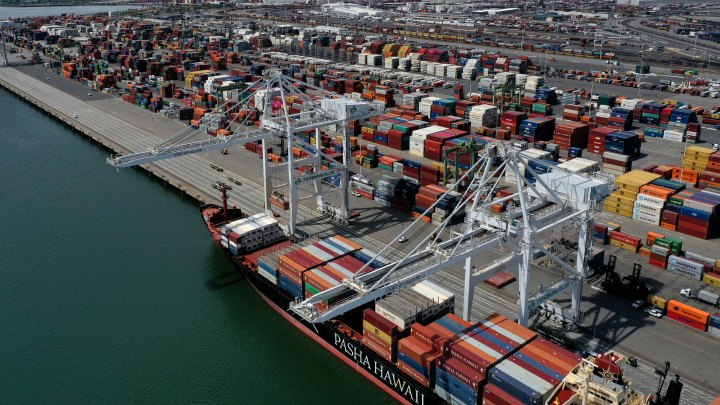 The U.S. Census Bureau reported Tuesday that imports of consumer goods in August hit their highest level on record. Same goes for imports of food and beverages. All told, the trade gap widened in August to $67 billion — the highest level in 14 years.

For an economy that’s still struggling to recover, let alone expand, that trade deficit number might actually be good news.

The fact that imports to the U.S. are rising says a lot about how far the economy’s come since the start of the pandemic, said Eswar Prasad, professor of trade policy at Cornell University.

“Economic recoveries are usually associated with increases in demand for goods and services produced both domestically and abroad,” Prasad said.

That increasing demand for imports is a sign that consumers have more purchasing power.

“It’s a sign of rising consumer confidence, [and] it’s a sign that firms are buying imported inputs that they may need to produce things that will become tomorrow’s exports,” said Emily Blanchard, a professor at the Tuck School of Business at Dartmouth College.

Harvard economist Ken Rogoff said the trade gap is widening because exports are not rising as quickly as imports. And that could complicate the recovery.

“We need the rest of the world to demand more of our stuff to help our recovery,” Rogoff said.

This month’s gap is a sign that the U.S. is recovering faster than many of the countries we trade with. Rogoff said the U.S. could lose that lead if job gains taper off, if a second stimulus package never arrives or if the virus picks up again.

“I expect in the next few months our recovery’s going to slow down quite a bit.

Still, there are reasons to be optimistic about exports in the long run. Blanchard said the U.S. is a net exporter of services, such as travel, financial and digital services.

“This is great. This is a source of comparative advantage,” she said. “If that means that we produce fewer T-shirts in the U.S., then I think that’s probably OK.”

Blanchard said the COVID-19 pandemic has made American digital services, like cloud computing and video conferencing, even more valuable.