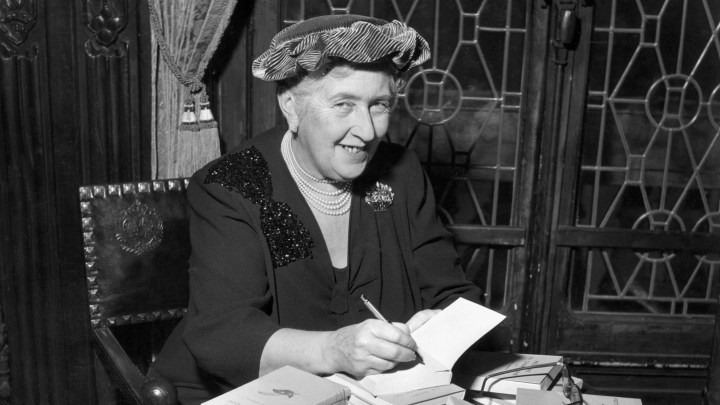 A century after her first novel “The Mysterious Affair at Styles” appeared in print, the Agatha Christie industry is still going strong.

According to the Guinness Book of World Records, Christie remains the best-selling fiction writer of all time, with total global sales exceeding 2 billion books in more than 100 languages. Her murder mystery play “The Mousetrap” holds the record for the longest-running stage production in the world, and the feature films and TV adaptations of her work continue to multiply. All this from the pen of a writer whose style is dismissed by some literary critics as “wooden” and “formulaic,” and whose lasting appeal is belittled by some as “truly mysterious.”

Agatha Christie fans shrug off such criticism. Apart from buying her books — and they bought more than 2 million of them in the English-speaking world last year — the most devoted fans pay homage to their heroine by making the trek to the southwestern county of Devon to visit what was the writer’s rural retreat for the last 38 years of her life. Greenway House, a sprawling Georgian mansion on a steep, wooded hillside overlooking the River Dart, is now owned and run by the National Trust, a charity that looks after places of natural beauty and of historic and cultural interest.

“Agatha didn’t actually write at Greenway, but it was the inspiration and the setting for some of her most famous books like ‘The ABC Murders’ and ‘Five Little Pigs,'” said Belinda Smith, visitor experience manager at the property.

“The murder scene in ‘Dead Man’s Folly’ is the boathouse at Greenway, which people have a chance to visit today,” Smith said. “It’s on the banks of the Dart; it’s part of the Greenway estate. So you can meander your way through the gardens and come down to the boathouse and see where the body was found.”

Last year, more than 115,000 people from all over the world came to Greenway on a sort of literary pilgrimage.

“We have real avid Agatha Christie fans who are delighted to come to her holiday home, sit where she sat and imagine themselves having dinner with Agatha, picnicking on the lawn with Agatha or walking the dog with Agatha,” Smith said.

If she were alive today, Agatha would probably be horrified. The writer hated being the center of attention, as she proved in a sound recording of a dinner held in her honor in 1962 to celebrate the 10th anniversary of “The Mousetrap.”

“This is awful!” Christie declared, clearly writhing with embarrassment. “I never have been any good at making speeches.”

The Queen of Crime who shot, stabbed, poisoned, strangled and electrocuted her fictional victims was shy, unassuming and sweet natured — and apparently mystified by her theatrical success.

“Sometimes I can hardly believe it’s me,” she stammered. “It’s not the sort of thing that would happen to me. If I was writing a book, it would not be a person like me that had written a play that had run for 10 years.”

She’d be even more mystified today. “The Mousetrap” ran in London for 67 years until COVID-19 interrupted it earlier this year. It’s due to reopen next month. Her novels, most of which feature the eccentric detective Hercule Poirot or the amateur and elderly Miss Marple, have done even better with total sales in the billions and with more than 7,000 translations of her work. Tony Medawar, organizer of the annual International Agatha Christie Festival (online this year due to the pandemic), said Christie’s enduring appeal isn’t hard to fathom.

“People still enjoy the way Christie winds the clues in and out of the narrative and plays tricks on the reader, which work on screen stage and on paper,” Medawar said. “Also, she writes in an incredibly accessible way. I’ve met people from all around the world who were taught English and learned English by reading Agatha Christie.” Medawar has little time for critics who disparage her prose.

“I think the only response that one can make to criticism of a great writer whether it’s Enid Blyton, J.K. Rowling, Agatha Christie or Dan Brown is to point to the sales figures,” he said. He might also point to the movies and other adaptations.

A remake of “Death on the Nile” — the latest of more than 50 Agatha Christie feature films —  is due out in December. It follows the 2017 remake of “Murder on the Orient Express,” which grossed over $350 million.

And there has been more activity on the book front.

Agatha Christie Ltd., which owns the copyright on much of the Christie canon and carefully guards the author’s image, commissioned British author Sophie Hannah to write some more Poirot novels. Hannah seems well qualified for the task: She was already a best-selling crime writer; course director for the University of Cambridge’s crime and thriller writing master’s degree program; and founder of the Dream Author coaching program for writers.

But she clinched the Poirot job by correctly answering this question: “Would you want to change anything about Poirot and bring him into the 21st century?”

“I said, ‘Goodness me, no!’” protested Hannah. “I hated the idea of bringing him into 21st century where he’d be able to Google all the suspects and look at their Twitter profiles. I thought that would be terrible.”

Hannah’s fourth Poirot novel, “The Killings at Kingfisher Hill,” was out in the U.S. in September. The publisher Harper Collins won’t say how well her other three forays into Christie-land have done, but Sophie says that while her own crime fiction has made her a wealthy woman, the Poirot books have made her “richer.” And commissioning these so-called “continuation novels” seems to have been good for the Agatha Christie company, too.

“The sales of her novels have massively increased since there started to be new Poirot novels because people have just been reminded that she’s still a going concern rather than something from the past,” Hannah said.

Like the Queen of Crime herself, the Agatha Christie company prefers to keep a low profile, refusing to answer Marketplace’s questions about revenues. But a swift bit of sleuthing reveals that the company earned $33 million in royalties in the latest year it reported.

Quite a killing! Who dunnit? Agatha. That’s who.