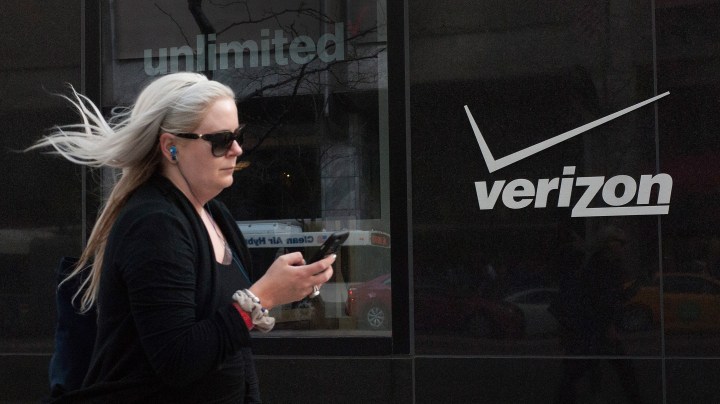 COPY
Verizon is angling for a piece of the pre-paid phone plan market, which continues to grow during the pandemic. Scott Olson/Getty Images

Verizon is angling for a piece of the pre-paid phone plan market, which continues to grow during the pandemic. Scott Olson/Getty Images
Listen Now

People who use a prepaid, month-to-month phone plan are usually people who are living month to month.

“Having a prepaid phone means that you control what the charges are and when the charges are,” said Angela Siefer, executive director of the National Digital Inclusion Alliance.

Maybe your credit history means you don’t qualify for a traditional contract plan. Or you can’t afford your plan one month so you downgrade. With a TracFone prepaid plan, $15 a month gets you 500 minutes, 500 texts and 500 megabytes of data. And you can top off your minutes at a retailer like Walmart or Best Buy.

“It’s a huge market,” Siefer said. “And in this recession, we can only assume that the market would increase.”

He said prepaid phone plans make up almost 20% of the U.S. market. And Verizon is taking a bet this number will grow fast — faster than the time it would take to bolster its own prepaid service. Because why spend money on a makeover if it can just buy TracFone’s 21 million customers?

“It’s kind of the fast-track way to gain some significant share on the prepaid side,” Iadarola said.

And this deal isn’t just a pandemic grab. It’s a purposeful expansion. Ever since the market was boiled down to three major providers — Verizon, T-Mobile and AT&T — these companies have had to become everything to everyone.

“The carriers are having to look at other ways to grow,” said Terry Kramer, faculty director of the Easton Technology Management Center at UCLA.

The deal still needs approval from antitrust and telecom regulators, but Kramer says it’ll probably go through. Because unlike the T-Mobile and Sprint merger that happened earlier this year, Verizon and TracFone can argue they’re in complementary, not competing, markets.