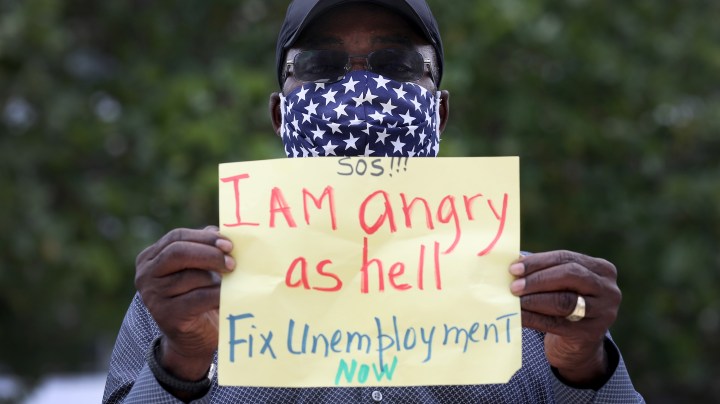 COPY
A protester holds a sign calling for a fix to unemployment benefits at a protest in Miami Beach. Joe Raedle/Getty Images
COVID & Unemployment

A protester holds a sign calling for a fix to unemployment benefits at a protest in Miami Beach. Joe Raedle/Getty Images
Listen Now

It’s now been seven weeks since the millions of workers receiving unemployment benefits in this country stopped getting an extra $600-a-week in Federal Pandemic Unemployment Compensation payments, helping them to stay afloat and pay their bills.

At the end of July, about 25 million jobless Americans suddenly lost the extra federal benefits from their weekly unemployment checks, leaving the typical recipient with $325-a-week on average across the country.

Meanwhile, it has been five weeks since President Donald Trump announced a partial, temporary replacement for those $600-a-week unemployment payments: a program he called Lost Wages Assistance.

That unemployment benefit — planned as a $300-a-week check from the Feds with $100-a-week kicked in by the states — is coming from the federal government’s FEMA disaster relief money.

President Trump’s pandemic-unemployment replacement scheme, announced in early August, was slow to get off the ground, said Andrew Stettner, a senior fellow at the Century Foundation.

“The stopgap that was put into place was tardy and insufficient, and it’s already running out,” Stettner said.

So far, about 20 states have distributed the FEMA benefits, most at $300-a-week. More states have applied for their FEMA money — which is capped at $44 billion nationwide, enough to cover just six weeks of benefits.

“Almost as soon as people get the money, they won’t be getting it anymore,” Stettner said.

By his calculation, about $10 billion in extra jobless benefits have been paid out so far under Trump’s Lost Wages Assistance program, compared to $68 billion that would have gone out if the original $600-a-week payments had continued.

Johanna Meagher, a health care worker, is trying to cope with the loss of that extra federal money. She lives in Maryland and has three elementary-age kids — all at home right now. Both she and her husband have been out of work since March, and both have received unemployment.

She’s been struggling since their federal pandemic benefits ended in July.

Maryland just announced it’ll start paying out the extra $300-a-week benefits, but it hasn’t cut any checks yet.

“So now I’m trying to survive and pay our rent, our bills and our food on what amounts to $645 a week,” Meagher said. “I mean, it’s not survivable here.”

Federal pandemic jobless benefits are popular. According to a poll by Ipsos, 78% of Americans support additional payments to people unemployed due to coronavirus, including 85% of Democrats and 68% of Republicans.

Chris Jackson, senior vice president at Ipsos, said 46% of those recently surveyed had lost a job themselves or had someone in their family lose a job in the pandemic. And he said support for additional federal unemployment assistance is strongest among those most impacted by job loss — lower-income workers in service industries, whose jobs aren’t easily done remotely.

Unemployment claims are soaring. Are the states ready for the onslaught?