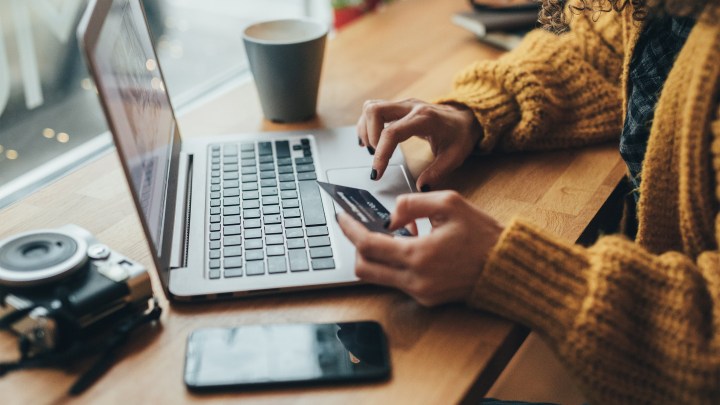 COPY
Shopify, as well as other online selling platforms, helped millions of merchants create their online sites to continue to sell goods throughout the pandemic. But since more people are getting vaccinated, how will Shopify remain relevant once people are back to brick and mortar stores? Filadendron/Getty Images

Shopify, as well as other online selling platforms, helped millions of merchants create their online sites to continue to sell goods throughout the pandemic. But since more people are getting vaccinated, how will Shopify remain relevant once people are back to brick and mortar stores? Filadendron/Getty Images
Listen Now

Online shopping has exploded during the pandemic. And alongside that, there’s been a boom in plans that let shoppers pay for the things they order online in installments.

A growing crop of companies is offering installment plans at e-commerce check out. Last week, the payments company Paypal launched its own version, allowing users to make purchases with four payments, instead of paying upfront.

“Consumers are using these tools to finance $30 purchases, or a pair of shoes,” Shevlin said.

Many of these services — Paypal, Klarna, QuadPay — pop up at the check-out page.

“If things are as easy as possible for the customer, that benefits us as the retailer,” said Aaron McGlown, who handles e-commerce for LVNDR Beautique.

McGlown’s company uses a service called Afterpay, which charges merchants 4% to 6% of every transaction. That’s about twice as much as credit cards.

“Generally within the first 24 hours of launching with a retailer, we’ll process 10% to 30% of their online transactions,” Molnar said.

A July survey from the personal finance site, The Ascent, found that almost half of consumers between the ages of 25 and 44 have used a buy-now, pay-later service.

Maurie Backman, who authored the report, said the two most popular reasons were to avoid credit card interest and to make purchases that otherwise wouldn’t fit into people’s budgets.

That can be risky, said Ira Rheingold, executive director of the National Association of Consumer Advocates.

That’s why Alicia Cunningham started using Afterpay. She runs a YouTube channel, where she reviews beauty and skincare products. Staying on top of new product launches can get expensive.

“I was so excited that I found the service that I kept spending, and it was giving me content to be able to post,” Cunningham said.

Then, Cunningham’s monthly payments started racking up. She said she was late on payments roughly ten times. Every one of those cost her $8 or more.

Cunningham said she just didn’t realize how much she was spending.

“It is so alluring to use, that you can get really caught up in all of your payments and end up owing too much,” Cunningham said.

Now, she says she’s figured out how to budget for her purchases. She says she’s a fan of paying by installments, because it makes expensive products more accessible.