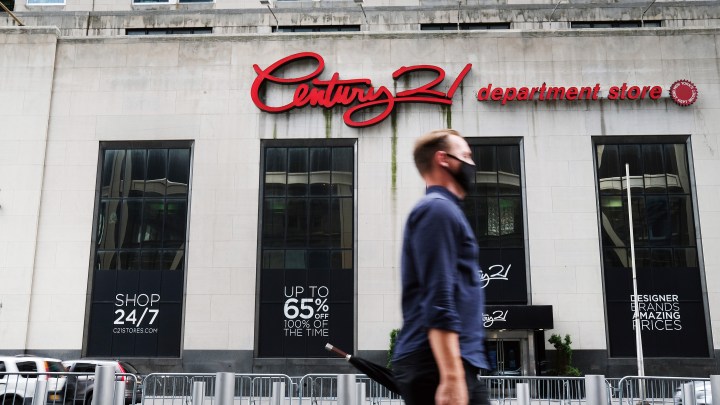 COPY
A Century 21 department store in lower Manhattan on Sept. 10. The company blamed its insurers for its bankruptcy. Spencer Platt/Getty Images
COVID-19

A Century 21 department store in lower Manhattan on Sept. 10. The company blamed its insurers for its bankruptcy. Spencer Platt/Getty Images
Listen Now

Brick-and-mortar retailers are fighting for survival in this pandemic economy, and some just aren’t making it.

On Thursday, Century 21 Stores, a clothing chain mostly in the Northeast, filed for Chapter 11 bankruptcy. The company said the pandemic played a role, but it also blamed its insurance company.

Century 21 didn’t mince words, saying its insurers had “turned their backs on us at this most critical time.” The company says that despite having business interruption insurance, when business was interrupted due to COVID-19, claims weren’t paid out.

In this case, like many others around the country, insurers say they don’t have to.

“The insurance industry charges for a policy based on the risks,” said Loretta Worters, vice president of media relations at the Insurance Information Institute, which represents the industry. “Now, because it’s a pandemic, it was never taken into the the rates when an insurance company provided that kind of coverage. So if you’re not paying for that, imagine the amount of loss the insurance industry would pay.”

In court fights all over the country, the industry is pointing to clauses and exclusions in contracts arguing the industry isn’t obligated to, nor can afford to, absorb the pandemic losses.

In the meantime, business owners are wondering what use their insurance is.

“And then you’ll also see a lot of folks are getting renewal notices for their policies for next year, and a lot of them, their rates are going up,” said Davis Senseman, a lawyer working with the small business advocacy group Main Street Alliance. “In some cases to 300%,” Senseman said. “So it’s understandable that small business owners are saying, ‘Wait a minute, if the industry didn’t pay out because of these exclusions, why are the rates going up?'”

Both insurance companies and business organizations are lobbying Congress for a fix. Leon Buck, vice president of government relations, banking and financial services at the National Retail Federation, said insurers need a federal backstop, using the program developed after 9/11 as a model.

“What it speaks to is if there’s another terrorism event, than the insurance companies will cover a portion and the federal government will cover the majority of the costs,” Buck said. “And that’s key, because after 9/11, no one was able to get insurance.”

Century 21 noted that its insurers did help it recoup losses in New York after 9/11, but the pandemic was the crisis it could not survive.