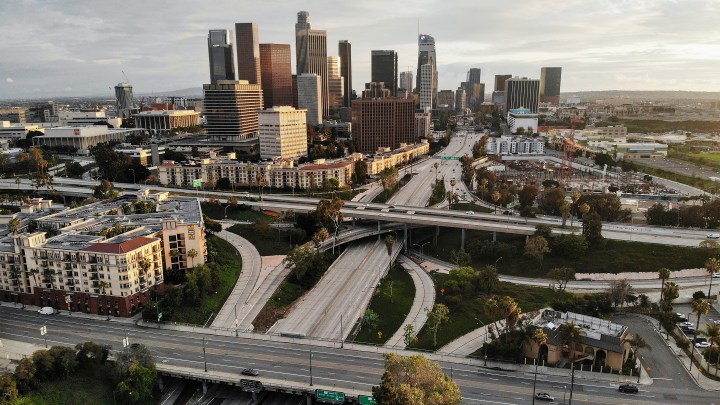 COPY
Los Angeles' famously crowded freeways were empty in April, during the height of the pandemic, as many office workers stayed home. Mario Tama/Getty Images
COVID-19

Los Angeles' famously crowded freeways were empty in April, during the height of the pandemic, as many office workers stayed home. Mario Tama/Getty Images
Listen Now

Prior to the pandemic, hopping in their cars to go to work was just what a lot of folks did.

A new study from the car-shopping app CoPilot found that newly remote workers nationwide have gained, on average, a little more than 10% of their workweek back. All that time and money people spend getting to the office and back also adds up to some serious cash.

Bill Eisele said his commute in central Texas before COVID-19 was about 25 minutes each way. He knows that’s relatively short. Eisele’s a research engineer at the Texas A&M Transportation Institute.

That’s $1,000 a year for time and fuel. He said people like him who can work from home are saving that time and money.

“I can’t imagine how that doesn’t continue to influence for quite some time,” Eisele said.

For years, government policies have tried to encourage people to take public transit or commute in different ways. Elliot Martin, research and development engineer at the University of California, Berkeley, said now companies might develop new policies to encourage telecommuting.

“I think the design of these policies potentially could receive new attention and new review based on what we’ve learned,” Martin said.

He said cutting out the commute also reduces gasoline consumption and CO2 emissions.